Join For Free
Share your location Order within 7 hrs 48 mins. 12 secs.
In Stock & Ready to Ship Orders placed before 3 p.m. ET usually ship the same business day (except weekends and holidays).
Ship to
Please enter 5 digits
Free Shipping Shipping and Delivery Times If we promise a delivery date and a delivery attempt is not made by this date, we will provide a refund of any shipping fees associated with your order. Questions? Call 800-449-9128
site1skuL44941000000000 true true Change Location 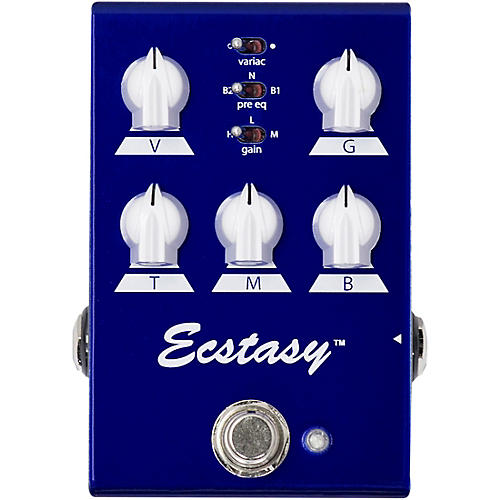 Unparalleled dynamics and amp-like response in a mini format.

When Bogner first distilled the Ecstasy amplifier’s blue channel into a pedal, guitarists everywhere immediately adopted them into their rigs for their unparalleled dynamics and amp-like response. After listening to many of the pedal’s faithful devotees, Reinhold found one way he could enhance an already great design. Introducing the Bogner Ecstasy Blue Mini.

With the exact same gain structure, EQ, and overall performance as its big brother, the Ecstasy Blue Mini is able to effortlessly swing from pristine clean boost to raging plexi tones. This tiny powerhouse does it while fitting comfortably on your pedalboard.

On the front of the pedal, you’ll find three mini toggles that fine-tuning the pedal’s grit, feel, and top-end character. Flip the pedal over and you’ll even find easy access to an internal trim pot for dialing in the midrange frequencies, just the way you like. As far as sheer tonal quality and sonic flexibility, it’s hard to beat the Bogner Ecstasy’s blue channel. Now you can command that same top-tier tone with the tap of your toe.

Great Thing, Small Package
Pedalboards are increasingly crowded situations these days, and real estate-hungry pedals often find themselves being pushed out. That’s why Bogner created the Ecstasy Blue Mini. It boasts all of the touch-sensitive character and massive gain range of its predecessor, but is ideally suited to your setup.

Familiar Control Layout
Reinhold continued to stay true to the Ecstasy amplifier’s blue channel with the pedal’s EQ and control layout. The 3-band EQ is voiced to precisely represent the amp, with mini toggles for variac, pre eq, and gain that define the pedal’s overall tonal character, allowing you to go from crystal clear tonal enhancer to raw, overdriven rock tones. What differs in this mini pedal is that the 3-band EQ is active with a sweepable mid frequency vs. the original pedal, which has a passive EQ.

From a Name Synonymous with Rock
It’s Reinhold Bogner’s commitment to always pushing the sound of guitar forward while paying homage to the classic tones of yesterday that has captured the ears of players such as Steve Lukather, Mark Tremonti (Alter Bridge, Creed, Solo), Walter Becker (Steely Dan), and Justin Derrico (Pink, The Voice). This legend of amplification knows what great tone is. And that’s exactly what the Bogner Ecstasy Blue Mini delivers.