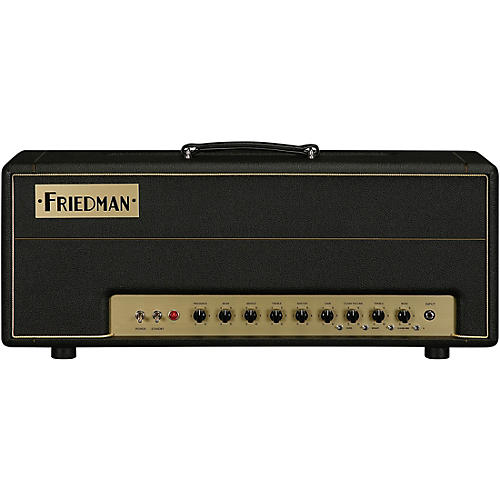 The Friedman BE100 is a hand-wired, 100-watt, EL34 powered, multi-channel British-style amp. By merely adjusting the gain and master volume controls, the BE100 can produce a variety of tones, seamlessly transitioning from blues to classic rock or hard rock to metal. To say it is British-styled is just the start of describing this inspiring tone machine.

The BE100 is a critically acclaimed amplifier created for the many musicians who have longed for the Friedman sound in a 100-watt format, as seen on the stages of superstars like Alice in Chains, Pink, Bon Jovi, The Cult, and Foo Fighters.

Plug into to the BE100 and you will instantly notice the huge, tight low-end and rich harmonically detailed chords at any volume, made possible by Friedman's superior
Master Volume control.

Single notes take on that Holy Grail singing quality all guitarists strive to attain but rarely can through most amps. The BE100 cleans up remarkably well with the guitar's volume control, even with the amp on higher gain settings. For a more dramatic clean sound, switch over to the clean channel and dial in the bass, treble and three-way bright switch tone-shaping controls.

All three modes (BE, HBE, CLEAN) can be accessed from the amp's front panel or from the included two-button footswitch. The BE100 was designed to take pedals and loves boosts, ODs, phasers, flangers, tremolos and wahs, while the brand new ultra-transparent series effects loop handles your time-based effects pedals and rack units.

Play through the BE100 and you'll see why this amp has received the prestigious Editor's Pick Award from Guitar Player Magazine (Nov, 2013).

Handwired in the USA.

FRIEDMAN HISTORY:
Dave Friedman is the man behind the signature tones of rock icons Eddie Van Halen, Steve Stevens and Jerry Cantrell. Dave Friedman has been building, modding and repairing amplifiers for many of the world's biggest stars for the past 25 years. Friedman's innovative designs and meticulous construction have made him legendary in the world of professional touring musicians while earning him a loyal clientele from all over the world. One of Friedman's mainstays has been modifying amps to each player's specific tonal palette, and to consult with other established amplifier companies to improve their own designs.

Dave Friedman's extensive knowledge and pursuit of tonal superiority inspired him to develop his own series of production amplifiers under the name Friedman Amplification. In the past, having Friedman build or modify your amp required a certain level of notoriety, but now his sonic wizardry is available to everyday players.

Each Friedman amplifier is hand-wired in the U.S.A. using only hand selected components. You can buy with confidence because Friedman Amps are designed and built to last a lifetime.