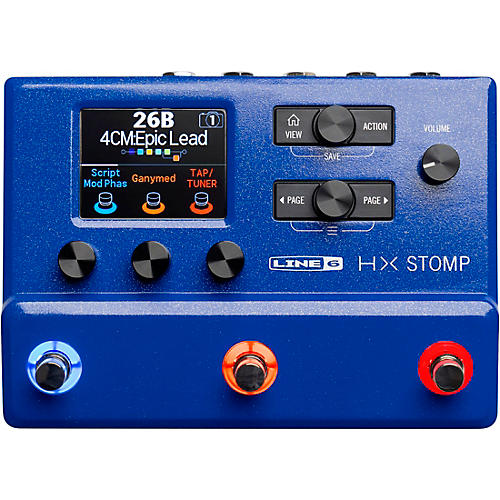 Join For Free
Share your location Order within 7 hrs 48 mins. 12 secs.
In Stock & Ready to Ship Orders placed before 3 p.m. ET usually ship the same business day (except weekends and holidays).
Ship to
Please enter 5 digits
Free Shipping Shipping and Delivery Times If we promise a delivery date and a delivery attempt is not made by this date, we will provide a refund of any shipping fees associated with your order. Questions? Call 800-449-9128
site1skuL69041000001000 true MFI=127 true Change Location

This limited-edition HX Stomp is a professional-grade guitar processor that delivers the sound of Helix amps, cabs, and effects in an ultracompact pedal with a cool white finish. Whereas the Line 6 HX Effects pedal is designed to be the centerpiece of a pedalboard, providing full control over individual effects, amp switching, and external MIDI-equipped pedals—HX Stomp is a programmable amp/cab/effects/IR pedal that seamlessly integrates into a variety of environments and applications. Use it as a "super stompbox," a backup or travel rig, an add-on tone expander when combined with other modelers, an audio interface—or even a complete guitar or bass rig.

The same HX Modeling technology that powers the flagship Helix guitar processor enables HX Stomp to run up to six processing blocks simultaneously, with pristine audio quality, making it the most powerful and flexible stompbox-sized guitar processor currently available. There are over 300 amps, cabs, and effects—including a looper. HX Stomp contains all the same HX models found in Helix family products, as well as the legacy effects library from Line 6 M-Series pedals, and stompbox modelers such as the DL4, MM4, FM4 and DM4. There are also presets created specifically for bass players, as well as individual bass amp and cab models.

Additional features include a choice of true bypass and DSP bypass with trails, a stereo effects loop for patching other pedals into the signal chain and 4-Cable Method setups, a jack for connecting two external footswitches or expression pedals, extensive MIDI control, IR (impulse response) loading capabilities, and a multichannel 24-bit/96 kHz USB audio interface. The free HX Edit app allows you to customize nearly every aspect of the pedal’s operation, create, save and load presets. It also provides preset librarian capabilities, IR loading and more.

Intuitive Control and Editing
Despite its tiny size, HX Stomp is easy to both operate and program, thanks to its simple but powerful controls, 320 x 240-pixel color LCD, and three capacitive-sensing footswitches with color-coded LED rings. External control via MIDI and optional expression pedal and footswitch control provide additional flexibility, as does I/O that may be configured for sophisticated routing such as simultaneously feeding an amp and a FOH mixer, 4-Cable Method operation with an amplifier, and easy studio re-amping.

A Complete Rig in a Pedal
Whether you need a backup for your Helix or other rig, a travel rig that will fit into a duffel bag with room to spare for cables and additional pedals, a convenient practice and rehearsal rig, or a complete guitar and effects studio recording setup—the HX Stomp provides the perfect solution. It even fits into the top pocket of a Helix Backpack.