Join For Free
Share your location Order within 7 hrs 48 mins. 12 secs.
In Stock & Ready to Ship Orders placed before 3 p.m. ET usually ship the same business day (except weekends and holidays).
Ship to
Please enter 5 digits
Free Shipping Shipping and Delivery Times If we promise a delivery date and a delivery attempt is not made by this date, we will provide a refund of any shipping fees associated with your order. Questions? Call 800-449-9128
site1skuL30257004000000 true MFI=1 true Change Location 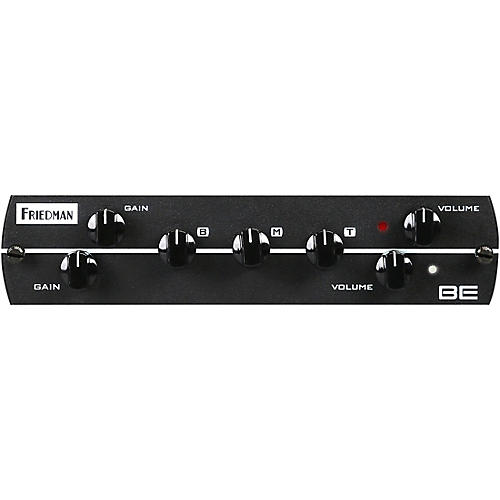 Get legendary Friedman sound from this versatile preamp module.

Dave Friedman is the man behind some of the most impressive tones in rock 'n' roll, and has been for over 25 years. Throughout that time, luminary players such as Jerry Cantrell and Steve Stevens have been relying on Friedman's amplifier modifications, repairs, and builds to keep them sounding at the top of their game. With that expertise in tow, Friedman moved into crafting his own line of top-shelf electric guitar amplifiers, instruments, and effects, and in doing so has built one of the most enviable rosters of artists out there. Whether discussing the plexi-on-steroids tone of the BE-100, the pedal-platform versatility of the Buxom Beauty, or the fire-breathing Bill Kelliher signature Butterslax head, Friedman amps are undoubtedly taking over as the premier rock 'n' roll electric guitar amplifiers.

Few modern amplifiers carry the intrigue of Friedman's flagship BE-100. Born from the expertise Friedman gained modding and maintaining some of the greatest British-style tube amps out there, the BE-100 combines the best elements of each with a healthy dose of Friedman's own design ingenuity to create, what many players feel is, the quintessential plexi-style amplifier available today. The amp's ability to dish out thick waves of overdriven power while simultaneously keeping the nuanced character of your individual style have made it the go-to amp for players and bands, such as Dave Weiner (Steve Vai) and the Foo Fighters. When players talk about Friedman amps, the BE-100 is always at the top of the list.

Thanks to the Synergy Friedman BE preamp module, the exact tone and feel that makes the BE-100 a legendary amplifier can be at your fingertips. Far from modeling or emulating, Dave Friedman himself designed this module, nailing every detail of his amp's to-die-for tone and impressive touch sensitivity. By utilizing a pair of 12AX7 preamp tubes to power its two similarly voiced channels, whether you're switching between a high-gain rhythm tone and a boosted lead sound or a gritty rock 'n' roll crunch and a more aggressive distortion, the amp’s tone will always be present, aggressive, and hopelessly addictive. If you want to give your Synergy rig cream-of-the-crop British roar, you'll want to grab a BE preamp module.

The Synergy BE pre-amp module features two channels. Each channel has a gain and volume knob with a shared three band EQ.

Cathode Select Switch
The BE module features a three position switch on the PCB which allows you to configure the input tube bass response to match the original circuit of the selected module. This will affect the feel and tightness. Each amp designer has a specific combination of components that makes up their input tube circuit. We have selected the three most popular combinations which you can access with this switch. For example, Friedman modules use position 2. The USA voiced modules typically use setting 1. The Soldano SLO uses position 3. Of course, you can experiment and try any of the positions to see what you prefer. The modules will come preset to the designers preferred setting which for the BE module is position 2 (2.7K resistor and .68uf capacitor).