Track your orderReturnsFAQsMake a card paymentWhy shop with us? RewardsBlogHelp
10% off with code: ROCKTOBER
ProCo

Join For Free
Share your location Order within 7 hrs 48 mins. 12 secs.
In Stock & Ready to Ship Orders placed before 3 p.m. ET usually ship the same business day (except weekends and holidays).
Ship to
Please enter 5 digits
Free Shipping Shipping and Delivery Times If we promise a delivery date and a delivery attempt is not made by this date, we will provide a refund of any shipping fees associated with your order. Questions? Call 800-449-9128
site1sku502536000000000 true MFI=17 true Change Location 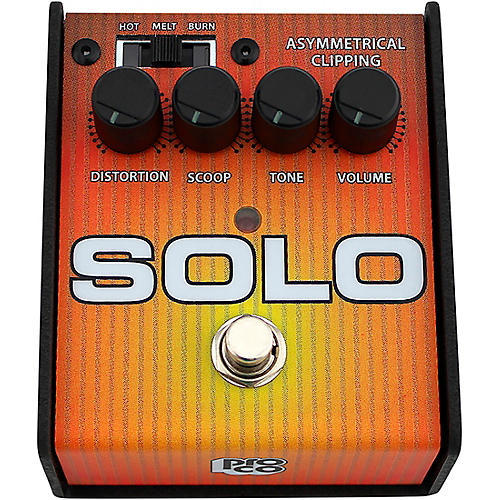 Although it is housed in the same indestructible and road worthy steel enclosure that has come to be a trademark of Pro Co stomp boxes, the Solo distortion guitar effects pedal marks a departure from the RAT series of pedals in more ways than just its cosmetics. With its enormous range of tones, 3-way selectable clipping modes ("hot, melt, & burn"), and highly interactive "scoop" and "tone" controls, the Solo just might be the most versatile pedal in your arsenal.

The Pro Co Solo Distortion pedal is equally at ease in both lead and rhythm capacities, and with a wide variety of amplifiers and guitars. Capable of going from vibey, chewy, warm low gain tones, to deliciously mean and crushing high gain tones, the Pro Co Solo pedal still remains remarkably true to the sound that matters most: The sound of you and your guitar. And speaking of staying true to the sound of your guitar, true-bypass switching ensures that when the guitar pedal is off, there is no coloration of your sound.

Even in its highest gain settings, the Solo remains extremely tube-like, articulate and touch sensitive. Complex chords ring out with clarity, leads sustain with ease. Roll back your volume knob and it cleans up, just like a good tube amp would.

The Solo effects pedal uses three pairs of carefully matched (or should we say, carefully mismatched) clipping diodes to produce asymmetrical clipping. The three pairs are accessible via the "hot, melt, burn" slider switch. This has the effect of making the Solo clip very much like a tube amp going into natural power tube distortion.

Pro Co Sound has been building professional effects since 1979. Since then, the RAT has evolved from a single, hand-built prototype into a family of versatile distortion pedals.