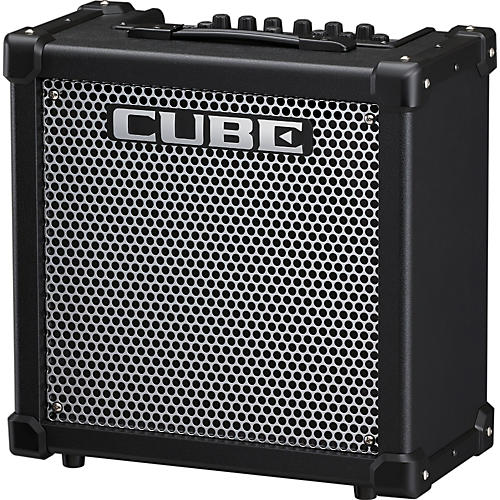 A compact and portable amp with features and power to do whatever you need.

Building on the top-level tone and rock-solid reliability that's made the CUBE name famous, the all-new CUBE-GX series turns up the heat with even more versatile operation and connectivity for Apple's iPhone, iPad and iPod touch. With 40 watts of power and a custom-designed 10-inch speaker, the compact CUBE-40GX is the ultimate go-everywhere amp for gigs, recording and practice at home. 11 COSM amp types and three independent channels-including a fully programmable SOLO channel-provide sounds for playing any style, with remote control of channel switching, effects, and more via the optional GA-FC Foot Controller. i-CUBE LINK takes practice and mobile recording to a new level, providing a built-in audio interface for working with music apps on your favorite iOS devices.

FLEXIBLE COMBO FOR GIGGING, RECORDING, AND PRACTICE
Featuring 40 watts of power, a custom-designed 10-inch speaker, and a slightly larger cabinet than previous designs for even better performance, the CUBE-40GX delivers satisfying, versatile guitar tones with integrated effects. Compact and easy to carry, it provides plenty of volume for everyday playing at small clubs, coffee houses, houses of worship, rehearsals, and beyond. For recording, you can use the CUBE-40GX's RECORDING OUT/PHONES jack to mute the onboard speaker and send studio-quality tones with COSM speaker modeling directly to an audio interface or mixing board. Headphones can be used with this jack as well, perfect for silent practice sessions. Built with legendary CUBE construction standards, the CUBE-40GX is rugged, reliable and ready for the long haul.

COSM AMPS AND THREE INDEPENDENT CHANNELS
The CUBE-40GX is equipped with a wide range of COSM amp types and three independent channels for maximum tonal versatility. The JC CLEAN channel provides the renowned clean tone of Roland's famous JC-120, while the LEAD channel offers ten different amp choices, from blackface clean to Brit overdrive to the original EXTREME amp for massive, high-gain metal riffs. A third SOLO channel is completely programmable, allowing you to store all settings from either the JC CLEAN or LEAD channel, along with EQ and effects.

TOP-QUALITY EFFECTS AND MORE
With three independent, easy-to-use effects sections, the CUBE-40GX gives you a full arsenal of top guitar processing onboard. The EFX section offers five different stompbox-type effects, while the dedicated DELAY section has two different delay types and a TAP button for quickly setting delay times. REVERB is included as well, with your choice of vintage spring emulation or a studio-style plate. The CUBE-40GX also features a chromatic/manual tuner, built right into the amp!

I-CUBE LINK: BUILT-IN INTERFACE FOR IOS DEVICES
Onboard the CUBE-40GX is Roland's innovative i-CUBE LINK interface, which lets you integrate with your iPhone, iPad, or iPod touch using a real guitar amp with great tone. Unlike typical bulky and inconvenient iOS guitar interfaces, i-CUBE LINK connects to your device's audio jack quickly and simply with the included cable, providing two-way communication with your favorite music apps. With i-CUBE LINK, you can play along with music tracks and send studio-quality COSM guitar tones with effects straight into the recording app of your choice. The versatile i-CUBE LINK jack can also be used as a simple stereo input, enabling you to plug in nearly any music player or audio device and play it through the CUBE-40GX.

CUBE JAM APP: POWERFUL, FUN AND FREE!
Available for free from the App Store, the Roland CUBE JAM app turns your iOS device into a fun command center for jamming, recording, and learning. Play back commercial songs and minus-one tracks through the CUBE-40GX via i-CUBE LINK and riff along for hours with the amp's great COSM tones. CUBE JAM also records audio through the i-CUBE LINK connection, letting you capture your jams with a single touch. After recording, you can adjust the volume of your guitar and backing music independently in the app, then export your mix to a 16-bit, 44.1 kHz WAV file. CUBE JAM also includes powerful tools for music practice, including independent speed and pitch adjustment of audio playback, Center Cancel to remove solos and create your own jam tracks, and more.