Join For Free
Share your location Order within 7 hrs 48 mins. 12 secs.
In Stock & Ready to Ship Orders placed before 3 p.m. ET usually ship the same business day (except weekends and holidays).
Ship to
Please enter 5 digits
Free Shipping Shipping and Delivery Times If we promise a delivery date and a delivery attempt is not made by this date, we will provide a refund of any shipping fees associated with your order. Questions? Call 800-449-9128
site1skuJ47442000000000 true MFI=0 true Change Location 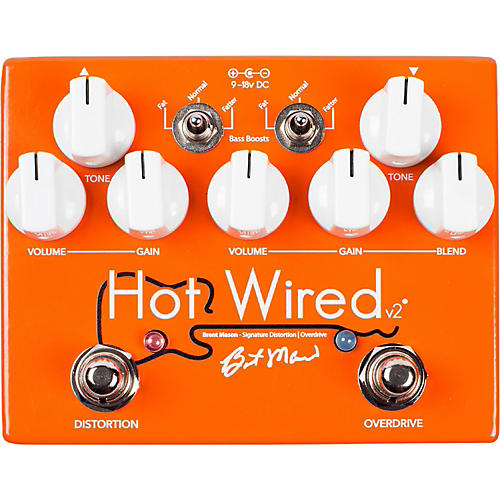 The Brent Mason Hot Wired V2: The only pedal versatile enough to be taken into the world's most demanding studio environment every day… Nashville master sessions.

A lot of people think they’ve never heard of Brent Mason. You may not recognize the name, but chances are you've heard him. Brent is, without doubt, the number 1 session guitarist working out of Nashville and has been since the early 1990s. Not only is he a legendary studio figure, but also a renowned composer and songwriter. His compositions have been used in countless films, TV shows and commercials. His solo albums, in particular “Hot Wired” (from which this pedal got its name) has become almost mythical in its reputation for guitar tone and quality of musicianship. With Brent, you will not believe it until you hear it.

Built on the foundations of the extremely popular V1, V2 stands alone in terms of versatility. The studio scene in Nashville has changed over the last few years, so Wampler changed the Hot Wired to mirror the industry Brent works in. V1 was geared towards all out chickin’ pickin’ and beyond. Expanding on that, the V2 brings you a broader range of subtlety in channel 1. You can still find the chickin’ pickin’ tones, but you can also find a deeper, warmer overdrive section that will allow you to play as smooth as you like. With the added blend control, you won’t believe how fat your tone can be without it sounding too overdriven. Channel 2 still has the same “British Plexi” flavor that Brent loves.

Two pedals in one (overdrive and distortion), the Hot Wired is without doubt one of the most versatile pedals available today. One channel of the Hot Wired has all your overdrive needs, from a gentle break up to all out crunch. The other gives you dirt and loads of fat, creamy distortion that is tonally perfect from top to bottom. If need be you can stack them both together for a huge, huge sound.