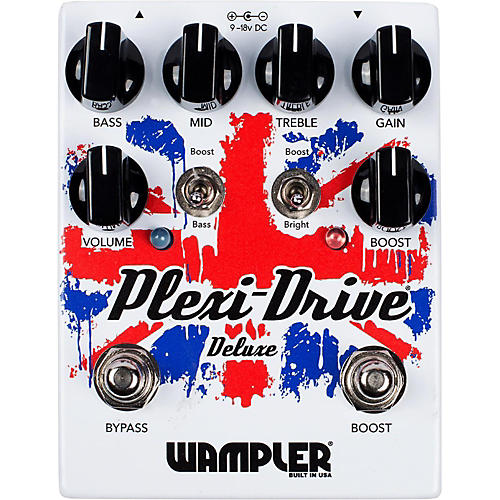 Join For Free
Share your location Order within 7 hrs 48 mins. 12 secs.
In Stock & Ready to Ship Orders placed before 3 p.m. ET usually ship the same business day (except weekends and holidays).
Ship to
Please enter 5 digits
Free Shipping Shipping and Delivery Times If we promise a delivery date and a delivery attempt is not made by this date, we will provide a refund of any shipping fees associated with your order. Questions? Call 800-449-9128
site1skuJ47469000000000 true MFI=0 true Change Location

An upgraded version of the infamous Plexi-Drive with new 3-band EQ and more.

Based on the classic Wampler Pedal “Plexi-Drive”, the Plexi-Drive Deluxe builds on the foundation of the original and gives you considerably more control to shape your tone. With a 3-band active EQ and additional brightness control, the Plexi-Drive Deluxe takes a huge step forward into the modern era of pedals. Complete with the perfectly voiced pregain booster, you can achieve almost any Plexi tone from virtually any amp.

Since the early '60s, Marshall Amplifiers® have lead the way in rock tones with its legendary tight overdrive and coveted bass response. Early rock legends such as Jimi Hendrix, Led Zeppelin, Cream, and AC/DC helped lead the way in creating some of the most iconic rock tones ever produced and catapulted Marshall® into rock legendary status.

With the addition of an all-new active 3-band Bass/Mids/Treble EQ stack, you can now have even more tonal control. With the bass boost option, you can emulate the feeling of the low-end thump of a 4x12 cabinet (or two) at the flick of a switch and can allow you to dial in your low end at lower volume gigs or at bedroom volume levels. To compliment this, Wampler also added a bright switch to add high end sparkle, which makes changing from bright to dark guitars (and amps) a breeze. The Plexi-Drive Deluxe also features a one knob, pre-gain boost soft click switch that is voiced like “that ‘valve’ screaming green overdrive with pronounced mids” to help push your leads into thick creamy overdrive.

Your search for the perfect versatile M.I.A.B. (Marshall® in a Box) can finally be over.