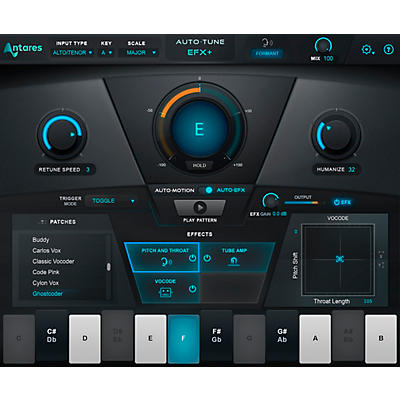 Do you sound a little pitchy, dawg? Auto-Tune to the rescue! Like it or love it, Antares' Auto-Tune has revolutionized not only modern recording procedures and processes, but much of modern popular music, as well. Since its introduction in 1997, Auto-Tune has been used on countless recordings, with effects ranging from the subtle and the sublime to in-your-face and over-the-top. Its use is so commonplace today that a large percentage of professional producers and artists rely on some form pitch correction during the recording process, either as vocals and instruments are tracked, or during mixing, mastering and other post production procedures, and it is also widely applied during live performances. The first use of Auto-Tune as a prominent vocal effect, rather than just for moderate pitch correction, is widely credited to Cher's tune â€œBelieve,â€ recorded in 1998, and for which the phenomenon is still sometimes referred to as the "Cher effect."

Since then, although it figures prominently in rap, hip-hop and R&B recordings, artists in genres ranging from country and rock to jazz and pop use Auto-Tune to either sweeten their performances, or to radically alter them. Perhaps the most prominent proponent in recent years is T-Pain, who has made his robotic vocoder-ized vocals a signature part of his sound, but everyone from Madonna and Daft Punk to Kanye West, Black Eyed Peas and Lady Gaga has used the effect openly, and, depending on your source, most other artists have discreetly, even those who had at one time publicly sworn off the technology as being too much of a crutch. So ubiquitous is its use that it was in danger of becoming a parody of itself, and triggering a widespread backlash. Death Cab for Cutie famously wore blue ribbons to the 2009 Grammys to raise awareness about â€œrampant Auto-Tune abuse,â€ and Jay-Z attempted to deliver a death blow with his single "D.O.A." or "Death of Auto-Tune."

However, reports of Auto-Tune's demise were greatly exaggerated, and, from iPhone apps to YouTube sensation "Auto-Tune the News," it seems there's no escaping the technology, and with good reason - it's a remarkable tool that achieves the never-before-possible. As with any tool, it can be used or abused, depending on artistic talent, intent and integrity. Think of distortion effects and wah-wah pedals - perhaps often overused when they were first introduced, they are now an integral part of many a guitarist's sonic arsenal. So too with Auto-Tune, available to the budding recordist or pro studio producer alike in a variety of configurations, even including built-in and pre-loaded in instruments, like the innovative Peavey AT-200 Auto-Tune electric guitar, which electronically keeps the guitar sounding in perfect pitch all the way up the neck, even if the strings are utterly out-of-tune, while still allowing for soulful bends and vibrato, as well as offering a variety of alternate tunings, 12-string and octavized effects. You can get started Auto-Tuning for under a hundred bucks with the Antares Auto-Tune EFX2 software package, which enables realtime pitch correction, of course, as well as Auto-Motion vocal pattern generation and the now-famous Auto-Tune vocal effect, so you can get your T-Pain on for cheap! Step up to Auto-Tune 7 for enhanced and added features like expanded keyboard shortcuts, updated Evo Voice Processing, and continuous scrolling of graphical audio data. Professional producers, studio engineers and recording artists will want to check out the Auto-Tune 7 Vocal Studio Toolkit, which provides unprecedented control over your sound to deliver world-class vocal tracks, including several enhancements to the graphical editing window; the MUTATOR Evo Extreme Voice Designer for truly unique vocal effects; the ARTICULATOR Evo Digital Talk Box for that â€œRocky Mountain Wayâ€ sound; and the CHOIR Evo Vocal Multiplier, for an instant Queen-style multi-tracked vocal effect, to name only a few. And you can take your pitch correction or collection of vocal effects on the road with the Auto-Tune Live software, allowing you to Auto-Tune in realtime, without distortion or other artifacts. No matter whether your approach to pitch correction is hipster ironic, tone-deaf or dead serious, Auto-Tune is here to stay. it's a tool like any other, and can be used or abused accordingly, so you might as well have some fun with it. Get your self in Auto-Tune today and start experimenting!