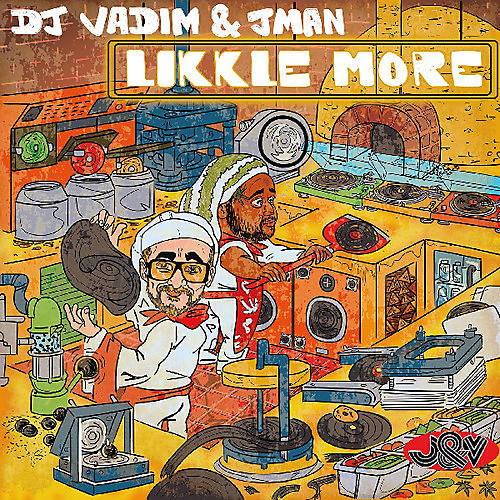 Release Date:07/05/2019;Notes:LP version. Working under the title J&V, the duo of DJ Vadim and Jman has been in the studio to focus their combined ta...Click To Read More About This Product

Release Date:07/05/2019;Notes:LP version. Working under the title J&V, the duo of DJ Vadim and Jman has been in the studio to focus their combined talents into one solid project, which acts as the perfect showcase for their respective skills on the mic and behind the boards. The legendary DJ Vadim, sound design mastermind who's been slaying turntables for the last two decades. Being a student of the reggae/hip hop sound, he has deep understanding for the culture and it's roots, giving him a fine ear for creating his own original riddims whether they're for reggae and dancehall legends Max Romeo and TOK from Jamaica, Fat Freddy's Drop in New Zealand to UK/US hip hop royalty Dilated People's and KRS 1, just to name a few. Then there's Jman, recognized as one of the most dexterous and adaptable MCs to come out of the UK, in terms of his lyricism and wordplay, as well as his ability to flow on almost any genre and style, from his infamous hip hop alias Babylon Dead to devouring grime raves, reggae dances, jazz band jams, jungle sessions, and beyond. After being signed to Greasy Vinyl at the tender age of 17, Jman released two solo albums before he went on to work and collaborate with an array of talent such as Rag'n'Bone Man, Mungo's Hi-Fi, High Focus, The Mouse Outfit, and Dub Phizix. The result of this union is a brilliantly constructed album that fuses elements of reggae, jazz, dub, hip hop, and jungle into perfection. The two main players are joined along the way by various supporting stars including amazing features from the likes of Jamaican ragga legend Daddy Freddy, upcoming sing-jay and Jamaican soap opera star Shanty B, Spanish cohorts Lasai from Legal Shot Soundsystem, OBF Soundsystem host Sr. WIlson, and award-winning multi-genre vocalist, Maddy.;Track List:1. Good Old Days (feat. Lasai);2. Upright (feat. Lasai);3. Bun My Weed (feat. Lasai);4. War In The Streets (feat. Sr. Wilson);5. I Was Like;6. Heart Attack (feat. Lasai);7. Bad Like This (feat. Shanty B);8. Humble (feat. Lasai Daddy Freddy Carey James);9. Militant (feat. Lasai);10. Everything Bless (feat. Maddy);11. Likkle More;12. 1312;13. Revolution Time