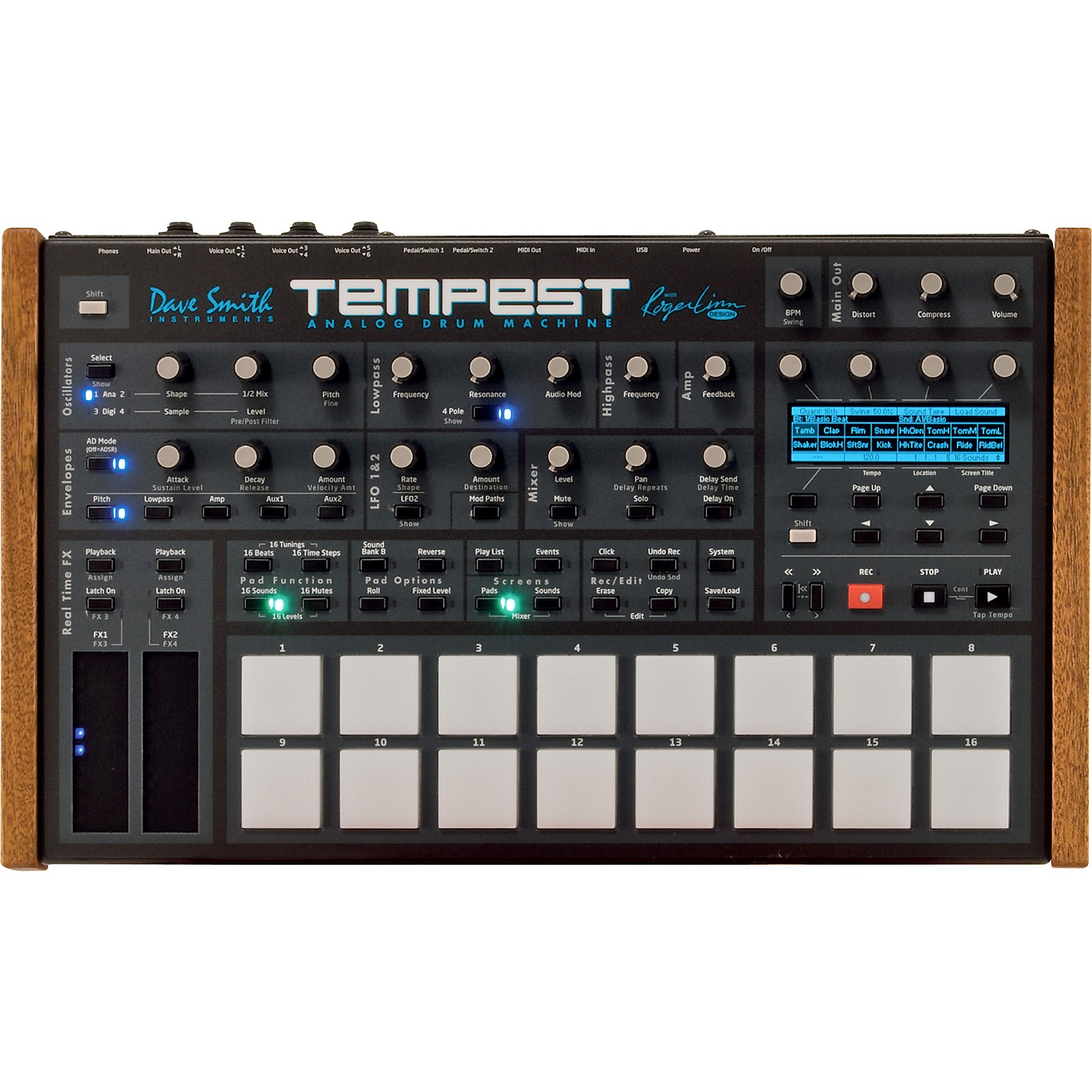 The Tempest by Dave Smith Instruments combines authentic analog and digital synthesis with an intuitive interface, 16 velocity/pressure-sensitive pad...Click To Read More About This Product

The first true analog drum machine for 2011 and beyond!

Update Required To play the media you will need to either update your browser to a recent version or update your Flash plugin.

The Tempest by Dave Smith Instruments combines authentic analog and digital synthesis with an intuitive interface, 16 velocity/pressure-sensitive pads, and a powerful sequencer. It's an instrument clearly meant to extend the capabilities and expand the imaginative reach of beat-oriented musicians everywhere. Now it comes with a new operating system for as well as entirely new internal sounds, beats, and projects. The new version, OS 1.4, ships with newly purchased instruments and is also available for download from the company's website for users wishing to upgrade instruments with older versions of the OS.

Each of the 6 analog voices has 2 analog oscillators plus 2 digital oscillators (with a large bank of included samples), Dave's classic analog low-pass filter with audio-rate modulation, an additional high-pass filter, analog VCA with feedback, 5 envelopes, 2 LFOs, an extraordinary variety of analog modulation routings, and stunning sonic quality, warmth and punch. Although optimized for drum sounds, it excels at tuned sounds as well, and even doubles as a 6-voice analog synth. In addition to the 6 direct voice outputs, there are stereo mix outputs and phones outputs, plus 2 inputs for foot switches or expression pedals, MIDI in/out and USB.

The performance-oriented operating system, 90 panel controls, and bright 256 x 64 OLED display work together to provide a tightly integrated, non-stop workflow: record a drumbeat in real-time, switch to another drumbeat and use the lit pads to record it using step programming, switch to another drumbeat and record tuned keyboard parts, use the 2 touch controllers to to record real-time note or beat-wide parameter animations, use the generous sound controls to edit any of the drum sounds, tweak the analog effects or drum mix, arrange beats in real time and record the live arrangement into a song, enter/exit Song mode and much more, all without ever stopping play.

16 pressure- and velocity-sensitive lit pads are arranged in a 2x8 configuration, providing intuitive access to all your fingers and providing the ideal compromise between the popular 4x4 pad arrangement (popular for real time programming ) and 1x16 arrangement (popular for step programming) because Tempest does both. The pads can be used to play 32 drum sounds (2 banks), mute/unmute the 32 sounds on playback, play and arrange 16 beats in real time, play one sound at 16 tunings (in a variety of scales) or 16 velocities, or as 16 time steps for step programming. The ROLL button permits creating drum rolls or repeated groove patterns by varying pad pressure as the beat records, and doubles as a momemtary "stutter" effect when the pads are assigned to play beats. Use the Sustain button on tuned parts like a keyboard's Sustain pedal, or to choke drum sounds or drumbeats when the pad is released.

A variety of unique effects are provided while maintaining a pure analog signal path: 1) Stereo analog compressor and distortion circuits affect the stereo output mix, 2) beat-synced delay is achieved by generating additional delayed note events within the sequencer, and 3) a beat-synced "stutter" effect is created entirely within the sequencer by looping short portions of the drumbeat on demand.

The degree of swing timing can be adjusted in real time during playback. Roger used his entire bag of tricks to make the swing sound very human and natural.

Co-developed by Dave Smith and noted instrument designer Roger Linn, Tempest has been embraced by musicians from a wide range of genres for both live performance and studio recording. "The new OS adds several powerful new features to an already powerful instrument," said Smith. "And we've enlisted the talents of some heavy-hitting sound and beat designers to come up with a extensive amount of new content that's not only fresh and inspiring, but also versatile." The new content takes advantage of the new OS features and was over a year in the making.

The fat sounds of the past meet the digital future.