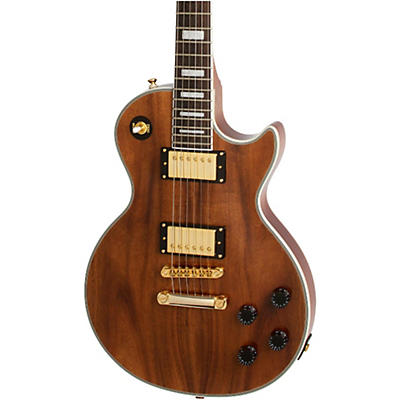 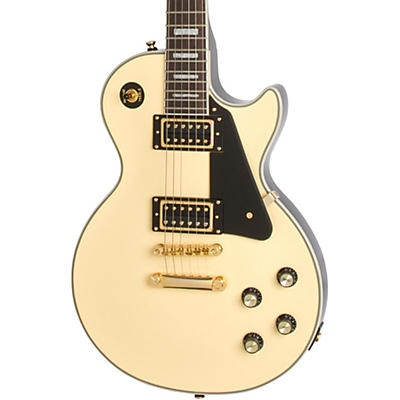 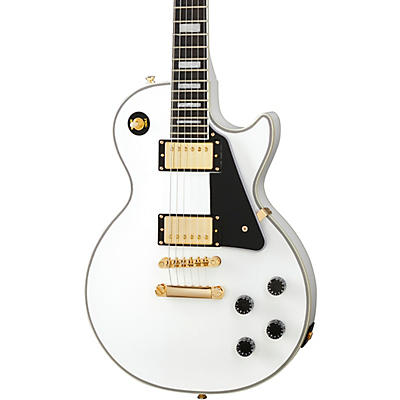 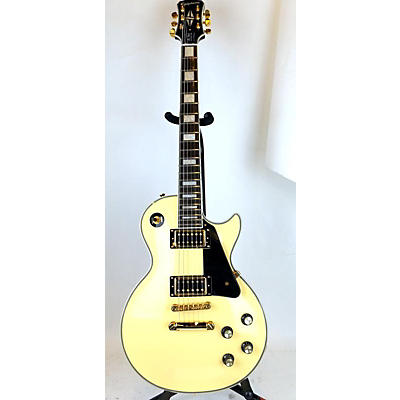 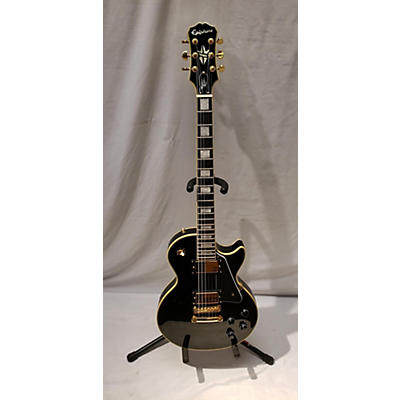 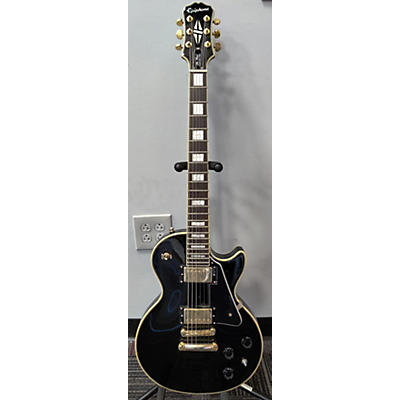 The Epiphone Les Paul Custom comes from a long line of distinguished guitars to bear that name. The original Les Paul Custom, also referred to as The Fretless Wonder and The Black Beauty upon its introduction in 1954, was intended to be a deluxe version of the Les Paul model, which was introduced in 1952. While the Custom certainly had frets, Gibson advertised it as The Fretless Wonder because the exceptionally low frets and smooth action made it seem fretless. The Custom featured a body of all mahogany, as opposed to the mahogany body and carved maple cap found on the original, as well as the new Tune-O-Matic bridge (rather than a trapeze tailpiece), and fancier inlays and binding, among other features. Later versions featured a pair of the new PAF (Patent Applied For) humbucking dual-coil pickups, with three-pickup versions also available. After the single-cutaway Les Pauls were discontinued in 1963 in favor of the thinner, double-cutaway devil horn SG design, Gibson continued using the Les Paul name until 1963, but the single-cutaway version is what most players think of when they think of a Les Paul Custom. Countless players have used Customs since the model's initial heyday - Franny Beecher with Bill Haley and the Comets was a rock n' roll pioneer with his Custom, Keith Richards used a Custom as far back as the mid-60s, and Led Zeppelin's Jimmy Page used a 3-pickup Black Beauty Custom with a Bigsby vibrato for much of his studio session work in England in the mid-60's, and on some early Zeppelin work. This guitar was stolen in 1970 and never recovered, but Gibson produced a limited edition reissue in 2008, built to Page's specifications. Ace Frehley of Kiss used a 3-pickup Custom, as did Peter Frampton, whose guitar was featured on the cover of his wildly popular Frampton Comes Alive album. (Frampton's guitar was lost after a plane crash in 1980, but in a remarkable twist, has recently been reunited with its rightful owner.) Other notable Custom slingers include Jimi Hendrix, Marc Bolan of T. Rex, and Les Paul himself, the innovative guitarist, inventor and record producer who co-designed the Les Paul model.

Today, the Epiphone Les Paul Custom continues that distinguished tradition with a variety of configurations and signature models for just about any playing style, at a very affordable price. For instance, the Epi LP Custom PRO features a fully bound body, neck and headstock, gold appointments and mother-of-pearl inlays, for that tuxedo Paul look, and pair of ProBucker pickups with coil-splitting for plenty of tonal power and versatility. The Blackback Custom is similarly appointed, with an Antique Ivory finish, and 70s-era contrasting black for the back. The Prophecy Plus EX is built to shred, with 24 Jumbo frets and a pair of EMG active pickups. Then there's Epi Custom signature axes from players like Zakk Wylde, Ace Frehley and others. If you're looking for classic Les Paul mojo and Custom-level class at a very reasonable price, you owe it to yourself to check out an Epiphone Les Paul Custom. Order yours today!