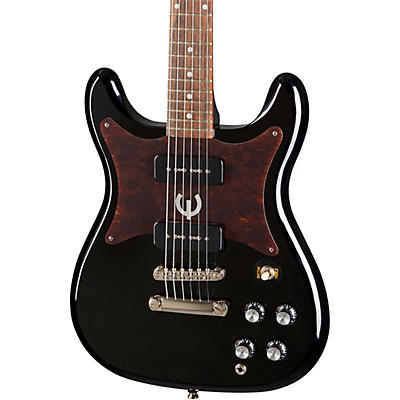 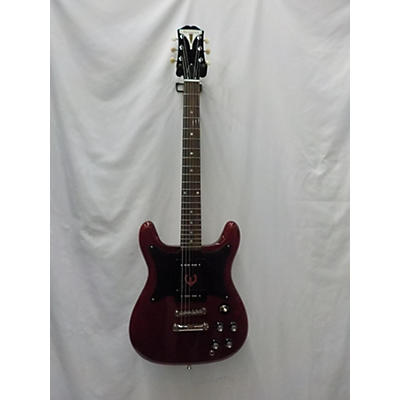 When Gibson purchased their rival Epiphone in 1957, they got a lot more in the deal than just the demise of a competitor who built archtops that were regarded by many to be the equal of their own (or better), but also a a second complete dealer network that they could provide with products. After the sale, Epiphone production was moved from Philadelphia to Gibson's factory in Kalamazoo Michigan, where, from 1959 until about 1970, all Epiphone instruments were made right alongside Gibson's models. Indeed, some models, such as the Epiphone Casino and Gibson ES-330 are nearly identical guitars, while others were unique new designs that were exclusive to Epiphone.
One of the new models that was added to the Epiphone line was the Wilshire Model SB-432. This model was first introduced in 1960. It had a mahogany body and set-in mahogany neck with a rather beefy rounded profile, rosewood fingerboard with 22 medium-jumbo frets, tune-o-matic bridge and stopbar tailpiece (a Maestro vibrato tailpiece was optional), a 24.75" scale length, two P-90 pickups and the classic two volume / two tone controls plus three-way pickup selector electronics package. Sometime during 1962, the pickups were switched to mini humbuckers. In 1963, the model changed yet again, with the body being reshaped to a more asymmetrical double cutaway with a longer upper horn than the earlier versions of the Wilshire had, and the strap button was moved from the neck heel to the end of the newly extended upper horn, which gave the guitar better balance when worn on a strap. The peghead was also switched from a 3+3 configuration to the "bat wing" style with all the tuners mounted on one side of the peghead at around this same time period. This design offers straight string-pull through the nut for improved tuning stability. As the 60s progressed, the Wilshire's neck profile was also changed to the thinner 60s slim taper style.
Originally produced in relatively limited numbers throughout the 1960s, the general public has only recently started to realize how cool vintage Wilshires are, and the prices have started to increase dramatically. However, Epiphone has reissued the Wilshire in a few different versions, and today you can get a brand new one; not only in affordable imported versions from Gibson's factory in Asia, but even limited edition models that are being manufactured in very limited numbers in the USA. Wilshires have excellent upper fretboard access, lots of sustain and a beefy yet cutting tone that works great for blues, rock and alternative styles, and a unique shape that sets them -- and their players -- apart from the "me too" crowd who select more commonly seen models. Indeed, some players who later went on to fame with other models also used Wilshires earlier in their careers; Jimi Hendrix, Johnny Winter and Pete Townshend among them.