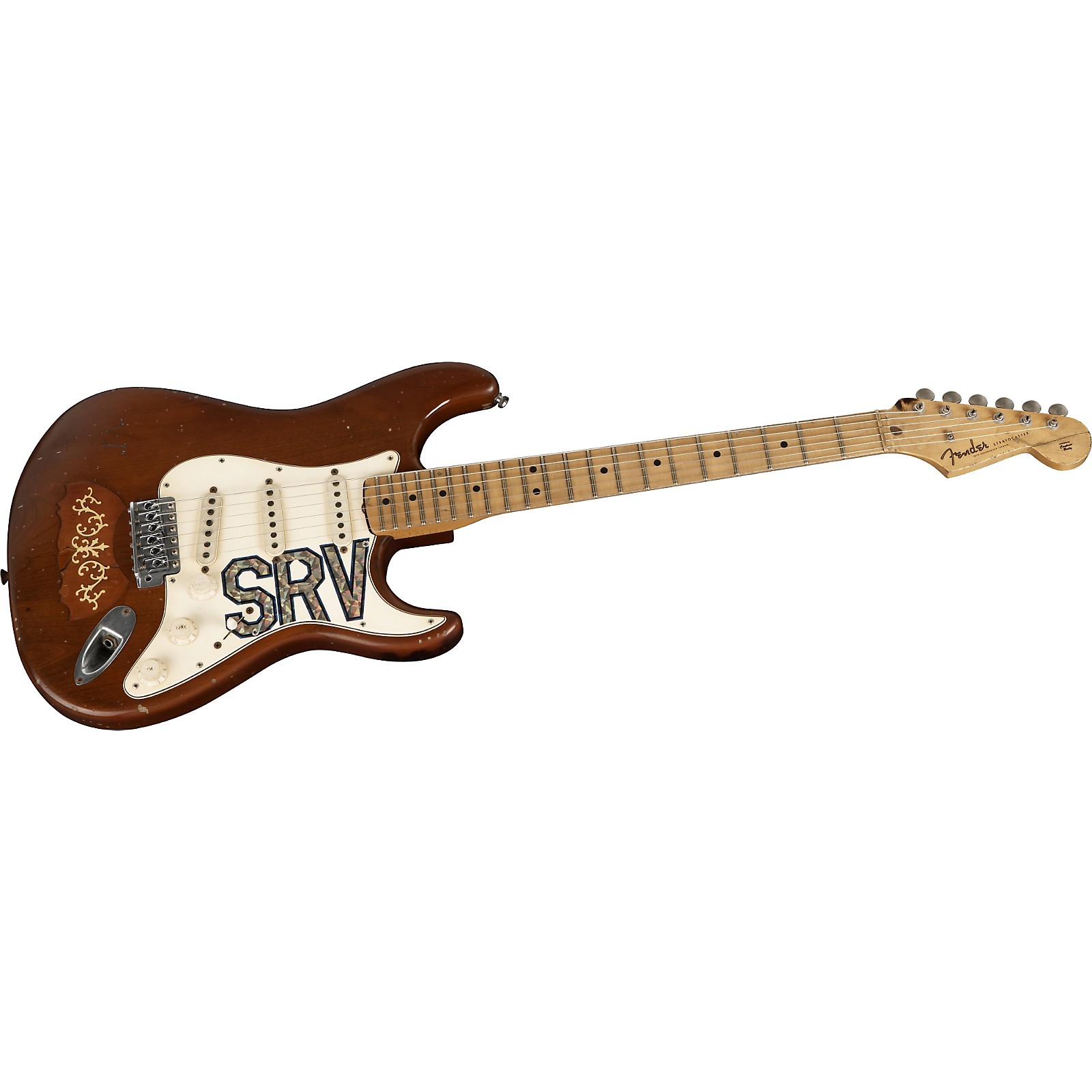 This emotive addition to the Custom Shop Tribute Series is an intricate reproduction of Lenny down to the smallest of details from the customized nec...Click To Read More About This Product

A meticulous re-creation of a unique guitar that tells a love story.

This emotive addition to the Custom Shop Tribute Series is an intricate reproduction of Lenny down to the smallest of details from the customized neck that was a gift from ZZ Top's Billy Gibbons, the reflective SRV stickers on the body, the battered headstock to the autograph that Stevie himself etched into the neck plate”even an autograph from legendary baseball great, Mickey Mantle.

The original Lenny guitar is a universally recognizable Fender Stratocaster, best known for its uniquely bright and powerful tone and known as one of Stevie Ray Vaughan's favorite instruments throughout his entire career. The guitar itself has an almost mystical heritage that can be traced back to the very beginning of Vaughan's rise to stardom.

Lenny's body is similarly storied; its most notable feature is a batwing-shaped inlay believed to be from a 1910 mandolin pickguard and reproduced in exact detail for the replica. The original sunburst finish was removed by heavy sanding, giving Lenny a much more rounded, smoother and softer contoured body than any Strat before or since. Subsequently refinished, the original sunburst finish still peeks through the clear mahogany lacquer.

It's easy to imagine Vaughan pulling into a truck stop and adding the SRV stickers to the shrunken, warped and cracked pickguard. The Custom Shop has recreated that ensemble with remarkable authenticity. The pickguard hides yet more treasures”a humbucking pickup cavity, unusually routed in the middle position, and a haphazardly wired control pot assembly with tone pots mounted in reverse. Re-creating the non-original bridge and strap-lock hardware is further evidence of the fastidious attention to detail. Ultimately, however, it's all about Vaughan's music, and he summed Lenny up best when he said, "It's always meant a lot to me. And I love what it sounds like."

Stevie Ray Vaughan was just a struggling young guitarist in Austin, Texas, in 1980, when his wife, Lenora 'Lenny' Vaughan, gave him a used Stratocaster that had recently caught his eye in a local pawnshop. It was a 1965 Fender Stratocaster guitar with the original pickups that, from the look of it, had seen better days. Although it began life as a three-color sunburst model, it had obviously been refinished (none too expertly) at some point, and now it had a dark natural finish bearing an elaborate inlay in the body behind the bridge. Nonetheless, there was something about it that clearly and immediately resonated deeply with Vaughan.

As Vaughan himself said during an interview published in the Feb. 1990 issue of Guitar Player magazine:
It's called Lenny. I found it at a pawnshop and didn't have the money to buy it, and my wife and several other friends of mine put a pool together and bought the guitar. It's always meant a lot to me. And I love what it sounds like. "Riviera Paradise" and "Lenny" (Texas Flood) are both played on the same guitar, and for some reason that guitar works for songs like that more than anything else. [Guitar Player, Feb. 1990]

Seven friends with $50 each pooled their money to buy the Stratocaster and gave it to Vaughan on his birthday during a celebration at a local Austin nightclub. He was thrilled. He took the guitar home and, sometime that night, as Lenora slept, wrote a new song on it. In the morning, Lenora Vaughan remembers, "He was sitting on the edge of the bed with the guitar and said, 'Listen to this.'" He played her the song he had written that night, "Lenny." The song later became one of Vaughan's most well-known instrumental pieces, and he continued to perform it exclusively on the Lenny guitar. Throughout the remainder of his career, the Lenny guitar traveled with Vaughan almost everywhere he went, and it was later autographed by baseball great Mickey Mantle during a chance meeting in Houston. On April 10, 1985, Vaughan had just performed the National Anthem at the season's opening game for the Houston Astros where Mantle was also in attendance as a guest of honor. Without a baseball or bat nearby, Stevie offered up his beloved guitar to be touched with the magic of the American sporting legend.