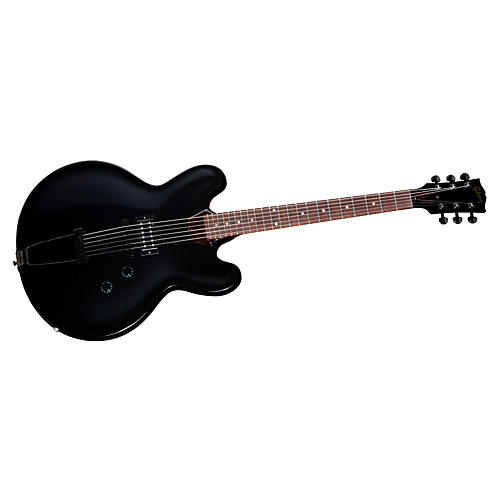 Classic tones from a powerful new combination of features.

Ever since its introduction in 1958, Gibson' legendary ES-335 has been haled as one of the most versatile electric guitars ever produced, adept at everything from jazz, to country, to blues, to heavy rock. The new ES-335 Studio with trapeze, though, lives for one purpose: to rock your world like no other semi-hollow electric guitar ever.

While it retains the classic design elements and full build quality of the finest ES-335s, the ES-335 Studio from Gibson' Memphis division strips away anything superfluous to focus like a laser on cranking out bone-crunching rock tone. This guitar has the same instantly familiar thinline, double-cutaway body styling from Gibson guitars seen in the hands of Eric Clapton, B.B. King, Alvin Lee and countless others, but the f-holes are eliminated to create a sleek-looking top that is also more resistant to feedback.

The electronics have been pared down to a single, super-hot Dirty Fingers Plus humbucking pickup in the bridge position, along with a single volume and tone pot. Equally hot-rodded looks are assured by your choice of Ebony Black or Midnight Blue finish, both in genuine smooth-satin nitrocellulose lacquer, paired with black hardware, tortoiseshell truss rod cover and neck-joint cover, and a black Corian nut.

Body and Neck
The ES-335 Studio is constructed in the image of the original 335s of the late 1950s, with a semi-hollowbody made from laminated maple with a bound Grade-AAA top layer and a solid maple center block, but without the traditional f-holes. The result is the perfect marriage of the traditional archtop' looks and sonic depth, with the solidbody' sustain and resistance to feedback. The neck is made from solid quarter-sawn mahogany, and topped with an unbound fingerboard made from baked maple, inlaid with simple pearloid dot position markers.

Pickups and Electronics
The ES-335 Studio is loaded with a single Dirty Fingers Plus humbucker, one of Gibson' hottest pickups. For unbridled crunch and wailing lead tones, all with singing sustain, this pickup was born to rock out”yet it boasts surprising clarity for mellower moments. A single volume and tone control keep it simple.

Hardware and Plastics
The ES-335 Studio carries Gibson' legendary tune-o-matic bridge with and trapeze tailpiece, as well as high-quality Grover Rotomatic tuners, all in black chrome. There' no pickguard, but a tortoiseshell truss rod cover and neck-joint cover lend an alternative touch of class.

Case and coverage
Every ES-335 Studio comes protected in a high-quality black, padded gig bag with padded straps and the Gibson logo embroidered in white and includes a Certificate of Authenticity.

Cut to the chase with this special guitar. Order today.