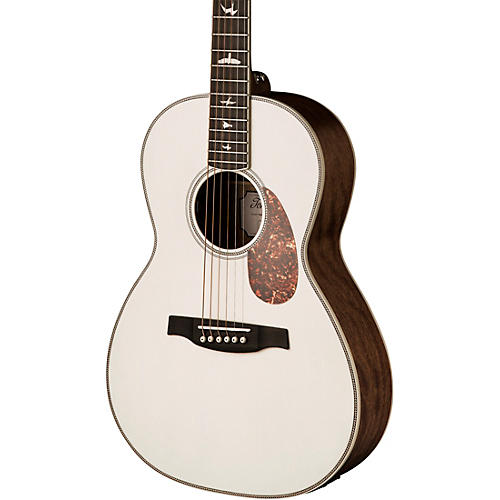 Join For Free
Share your location Order within 7 hrs 48 mins. 12 secs.
In Stock & Ready to Ship Orders placed before 3 p.m. ET usually ship the same business day (except weekends and holidays).
Ship to
Please enter 5 digits
Free Shipping Shipping and Delivery Times If we promise a delivery date and a delivery attempt is not made by this date, we will provide a refund of any shipping fees associated with your order. Questions? Call 800-449-9128
site1skuL77141000005000 true MFI=0 true Change Location

An all-mahogany parlor-sized acoustic-electric with a big voice and Fishman electronics.

The PRS SE P20E is a parlor-sized acoustic-electric with a big voice. The PRS P20E features all-mahogany construction, and has an organic, warm voice. With PRS hybrid "X"/Classical bracing—allowing the top to freely vibrate—the SE P20E projects with even, bold tone. Its smaller size makes it comfortable to play for hours and more convenient to transport.

Parlor-sized acoustics can be miscategorized because of their size, but this PRS acoustic-electric is a professional-grade instrument. Plug in and the Fishman GT1 pickup system delivers dynamic, organic tone; whether writing, recording or performing, the P20E is sure to impress. The electronics system features an undersaddle pickup and soundhole-mounted preamp with easy-to-access volume and tone controls, which transforms what some may consider a "couch guitar" into a workhorse stage instrument.

With a satin finish and herringbone rosettes and accents, the PRS SE P20E acoustic looks as good as it sounds. Other high-quality features include solid mahogany top, ebony fretboard and bridge, bone nut and saddle, as well as PRS trademark bird inlays and headstock design. The PRS SE P20E acoustic-electric comes with a gig bag and is strung with 12–53 strings.