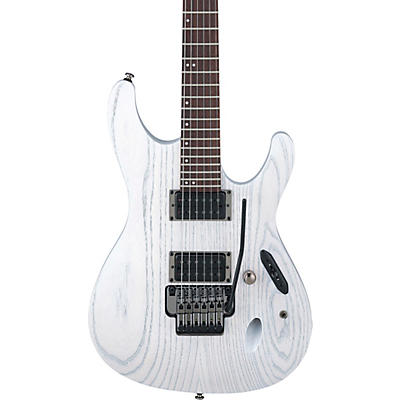 In his career playing lead guitar for the progressive band Between the Buried and Me, Paul Waggoner has tried his hand at half a dozen different Ibanez guitars. So, there's obviously something about them that keeps him coming back - and every reason for him to receive his own signature series, which was ultimately delivered through this lineup of Ibanez Paul Waggoner electric guitars. The PWM10 and PWM100 are based on a thicker, beefier version of the classic Ibanez S body style, with plenty of tweaks and customizations made in order to match up with Paul's personal specifications. After all, that's what a signature model is all about.

The biggest distinguishing feature of the PWM Series is the inclusion of signature PW Hornet pickups created by Mojotone, a custom pickup builder located in Paul's home state of North Carolina. They're known for their responsive hand-made pickups, and the Hornets are perfect examples to show what they can do. Each model mounts those to an ash body, creating a sound that Paul himself describes as "nice and full, but also has that sparkle" - the bridge position is aggressive and articulate, while the neck rings with a cleaner sound that balances the overall tone. Long story short: you'll cut through any mix without having to sound overly abrasive to do it.

For all they have in common, there are also some differences between the two Ibanez Paul Waggoner electric guitars. The first one you'd likely notice from picking up and holding them is the neck: the PWM10 uses a 3-piece maple and bubinga neck with a 16"-radius Wizard III profile, while the PWM100 swaps that out in favor of a 5-piece maple Wizard design at a 17" radius. The other major difference is the tremolo bridge, which is an Edge Zero on the PWM10 and a Lo-pro Edge on the PWM100. So if you're not sure which model is the best fit for you, it might come down to something as simple as those! When all is said and done, it's up to you to make the call.