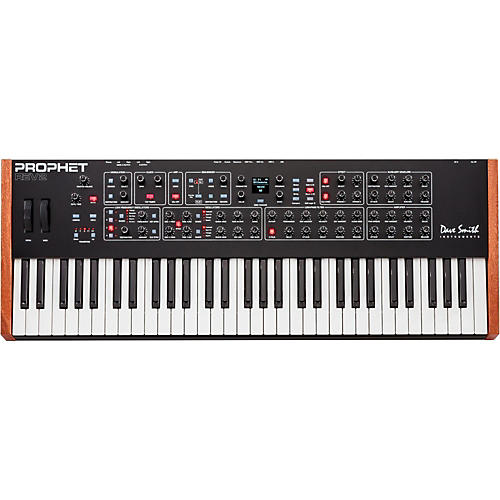 Join For Free
Share your location Order within 7 hrs 48 mins. 12 secs.
In Stock & Ready to Ship Orders placed before 3 p.m. ET usually ship the same business day (except weekends and holidays).
Ship to
Please enter 5 digits
Free Shipping Shipping and Delivery Times If we promise a delivery date and a delivery attempt is not made by this date, we will provide a refund of any shipping fees associated with your order. Questions? Call 800-449-9128
site1skuJ50457000000002 false MFI=10 true Change Location

The Prophet Rev2 is Dave Smith’s reimagining of his Prophet ’08 poly synth, a modern classic that has appeared on countless recordings and stages since its debut in 2007. The Prophet Rev2 retains all of the key features of the Prophet ’08 with twice the polyphony, twice the mod matrix, waveshape modulation on all waveforms, digital effects per layer in stacked or split voice mode, a polyphonic step sequencer per layer, and more. Best of all, you can download any of the many existing libraries of Prophet ’08 sounds and they not only sound identical, but are enhanced with the new features.

16-Voice Polyphony
With 16 voices to play with, you have the freedom to allocate them as you wish. Play two-fisted chords, stack two 8-voice sounds for massive, complex textures, or split the keyboard into two completely separate 8-voice instruments.

Bold Sound
The Prophet Rev2 gets its bold, punchy sound from its 2/4 pole, low-pass, resonant Curtis filters per voice. These are the same filters used in the Prophet ’08, as well as many classic instruments of the '70s and '80s. A separate Audio Mod control adds additional harmonic complexity and movement.

Waveshape Modulation
You can now vary the "pulse width" of any of the four waveforms (sawtooth, saw+tri, triangle, square). Using the Shape Mod control, you can dial in a desired waveshape width or use an LFO or other mod source for continuously shifting timbre. Even single-oscillator sounds take on new depth and dimension.

Poly Step Sequencing
The polyphonic step sequencer allows up to 64 steps and up to six notes per step. You can create a different sequence for each layer when you are working in stacked or split voice mode, making it a powerful tool for composition or performance. The sequencer also functions as a modulation source in gated mode, allowing you to create up to four different 16-step sequences for complex modulation. Sequences allow ties and rests, and can sync to an external MIDI clock. The arpeggiator features note repeats, re-latching, and can be synced to external MIDI clock, as well.

All of this polyphonic power is packed into a five-octave, premium-quality, semi-weighted keyboard with velocity and channel aftertouch. Other road-worthy features include an integrated power supply, USB support and a crisp OLED display, making the Prophet Rev2 an ideal instrument for gigging or recording, and an analog powerhouse like no other.