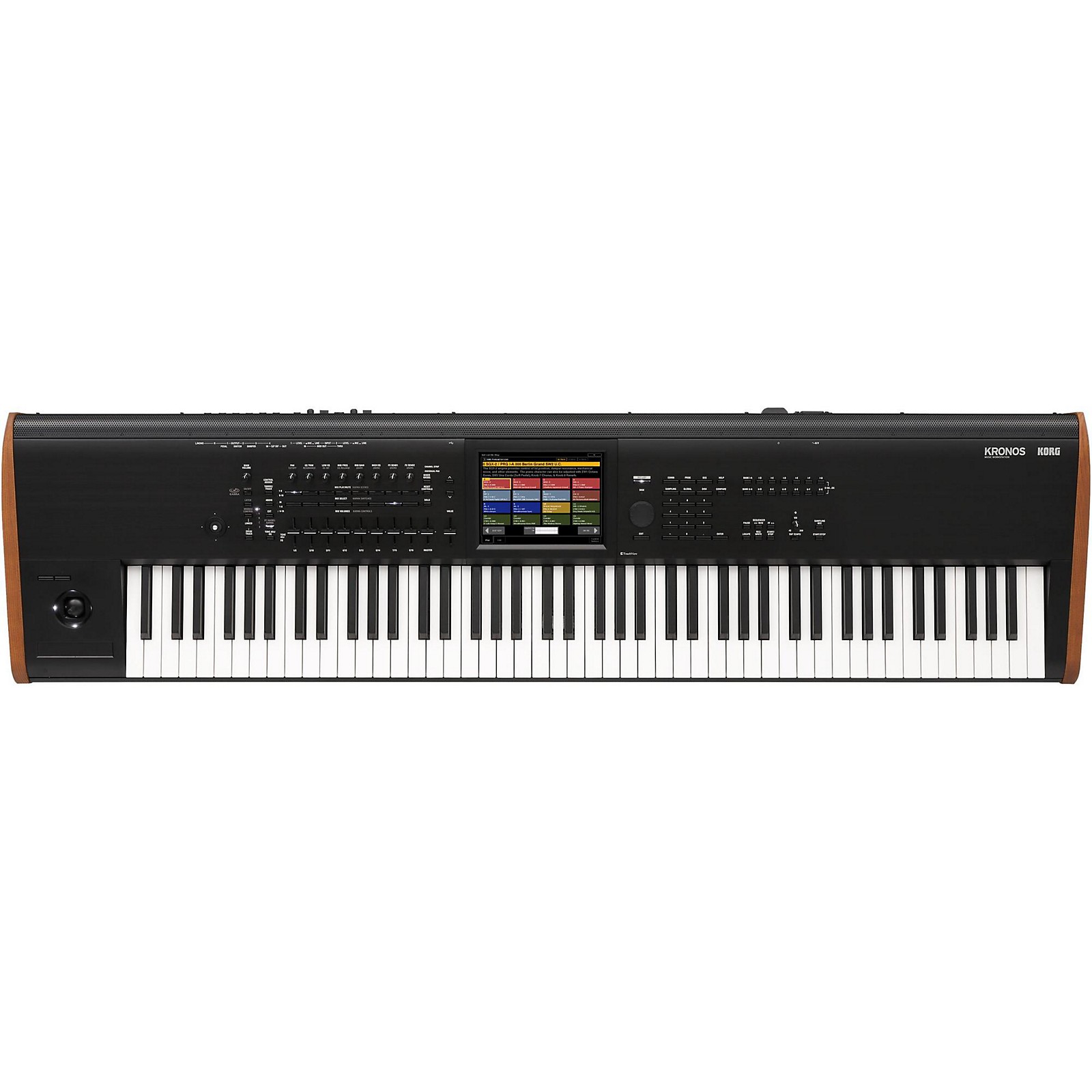 The Korg Kronos is the flagship keyboard of Korg's synthesizer line. It is available in three configurations, each with the same phenomenal performan...Click To Read More About This Product

A performance and studio legend.

The Korg Kronos is the flagship keyboard of Korg's synthesizer line. It is available in three configurations, each with the same phenomenal performance, production and synthesis capacity. The only difference between the three models is the key bed. This is the full 88-key version, equipped with Korg's RH-3 (Real Weighted Hammer Action 3) keyboard, one of the professional keyboard industry's best-loved piano touches. It is the same keyboard used on Korg's upper-end piano models and on the Korg SV-1. The hammer weighting is graded, providing a heavier feel in the lower register and a lighter feel in the upper register, just as on a grand piano, offering superb playability.

The Sounds
Kronos provides the absolute finest in keyboard sounds. Its presence in performance and production music has been felt across genres and age groups, charming some of the world's best practitioners of dance, rock, jazz, hip-hop and every other imaginable style of music. It has been embraced by many of the most successful and most furiously creative musicians on the planet. Wholly apart from the stunning depth and quality of the sounds themselves, the control tools on the Kronos invite emulation of the articulation component of acoustic instruments, as well as creative incorporation of articulations into synthesizer sounds as well. The expansive control surface offers joysticks, sliders, knobs, switches, a ribbon controller, assignable pedal inputs, and Korg's improved resolution color TouchView display. New additions include the easy-to-use Set List mode for song-specific and gig-ready sound selection, and the Smooth Sound Transition feature.

The Production Capacity
For many, the studio is where the work gets done; from laying down tracks, to building up grooves for an on-stage extravaganza, to delivering the soundtrack for today's media rich world. For these creative leaders, Korg has equipped the Kronos Music Workstation's sequencer with 16-track MIDI tracks plus 16 audio tracks, our Open Sampling System, dazzling hi-fidelity effects, as well as flawless plug-in integration with many popular DAW platforms. Of course, Kronos is equipped with phenomenal sound, dynamic drums, and an impressive array of premium sound effects. Add to that the ability to use KARMA, the Drum Track, and the sequencer's RPPR to greatly speed up and enrich the music creation process.

The Synthesis
In addition to being Korg' premier workstation, Kronos has it in its blood to satisfy the programmer, sound designer, and synthesizer enthusiast; the musician who dreams of turning visions of the cosmos into sound, of tweaking parameters to conjure invisible sounds from the ether. Kronos rekindles Korg's founding dream that is at the core of synthesis: the exhilaration and enjoyment of creating new sounds, sounds never before heard! A variety of exclusive Korg technologies drive the synth engines to provide astounding results - CMT (Component Modeling Technology); Physical Modeling, Digital Synthesis, Wave Sequencing, MDS (Multi-Dimensional Synthesis); KARMA and more!

The Connectivity
Kronos can send MIDI signals to and from your computer via USB. Using the Kronos Editor software (free download, coming soon), sounds and settings can be edited directly from your computer. The Kronos Plug-in Editor (free download, coming soon) lets you use Kronos from within many popular DAW systems, as if it were a plug-in instrument. Kronos can also be used as an audio I/O for your computer, sending and receiving two channels of audio via USB. In a music production system using your Kronos and a computer, there is no need to purchase any additional hardware, creating the simplest possible set-up.

The Inputs and Outputs
The Kronos provides a total of six channels of audio input: 2 analog channels, 2 digital channels (S/P DIF optical, 48 kHz/24-bit), and 2 USB channels. As audio outputs, you have the 2 main channels (L/MONO, R) as well as four independent audio outputs, 2 digital channels (S/P DIF optical, 48 kHz/24-bit), and 2 USB channels (note: the 2 digital channels and 2 USB channels output the same signal as the main L/R output). All analog inputs and outputs support TRS balanced connections. The analog inputs provide a MIC/LINE select switch and an independent level control for each channel, offering the flexibility to meet any situation. In addition to the type-B USB connector used for communicating with your computer, there are two type-A USB 2.0 ports for use with external storage media such as flash memory, hard drives, or CD-R/RW and DVD drives. The output of the Kronos can be resampled to a USB storage device such as a hard drive, or connected to USB CD-R/RW drive to create audio CDs.

The Sequencer
KRONOS features a sequencer/recording section that offers both 16 MIDI tracks plus 16 audio tracks; a great resource for putting together a dazzling performance or a brilliant production. MIDI sequencing makes it easy to capture ideas, inspiration, and pro-quality phrases using the KARMA, Drum Track, or RPPR (Realtime Pattern Play/Recording) functions. The 16-track audio recorder simultaneously captures up to four tracks of 16-bit/24-bit uncompressed data at a sampling rate of 48 kHz. Play along with recorded tracks, add effects, and then resample the KRONOS itself and place the resampled WAV files directly in a track. When polishing your tracks, feel free to use mixer automation and editing functions such as copy, paste, and normalize to get the results you want. Plug in a USB CD-burner and assemble your album right from the TouchView display

The Performance Power
The new Set List screen lets you instantly recall your favorite programs, combinations, or song data with a single touch, regardless of mode. There are 128 Set List locations, and each one can have 128 slots. Sixteen of these slots appear at a time as buttons in the TouchView display, color-coded to ensure easy visibility even in dim lighting. This is a great convenience during a live performance or in the production workplace. You can also leave notes for yourself using the Set List page, to remember the key of a song, for example. The Set List also provides a stereo graphic EQ at the final stage of the main audio output, which can be used to compensate for the acoustical character of the performance venue.

Kronos features Smooth Sound Transition technology. This powerful new addition is designed to maintain any currently held, played, or sustaining notes (with their effects), helping to prevent drop-outs from occurring when you switch sounds or change from Program mode to Combi mode. A high level of technology has been applied to finally bring this sought-after ability to reality, fulfilling the requests of many musicians.

Korg's TouchView graphical user interface is based on a new large, color 8-inch (800 x 600 pixel) touch screen. The TouchView display is the centerpiece of Korg's intuitive design, providing easy-to-view information and simple touch control. In developing Kronos, we also incorporated numerous images of actual instruments and their respective controls into the display, to ensure that the musician enjoys the feeling of playing an instrument - rather than controlling a machine.

In addition to the parameters accessible directly from the TouchView display, Kronos also offers a wealth of realtime controllers to enhance any performance and to aid navigation. A four-way joystick, ribbon controller, and two assignable switches are located to the left of the keyboard. An additional Vector joystick is nearby. Above the keyboard, nine sliders, eight knobs and a number of switches provide realtime interaction with features at the heart of the Kronos' impressive sound. The damper pedal input supports half-damping, providing another level of piano realism. In addition to the damper pedal jack, there are also two assignable pedal inputs, one footpedal type and one footswitch style.

Order today and work with the current state-of-the-art.