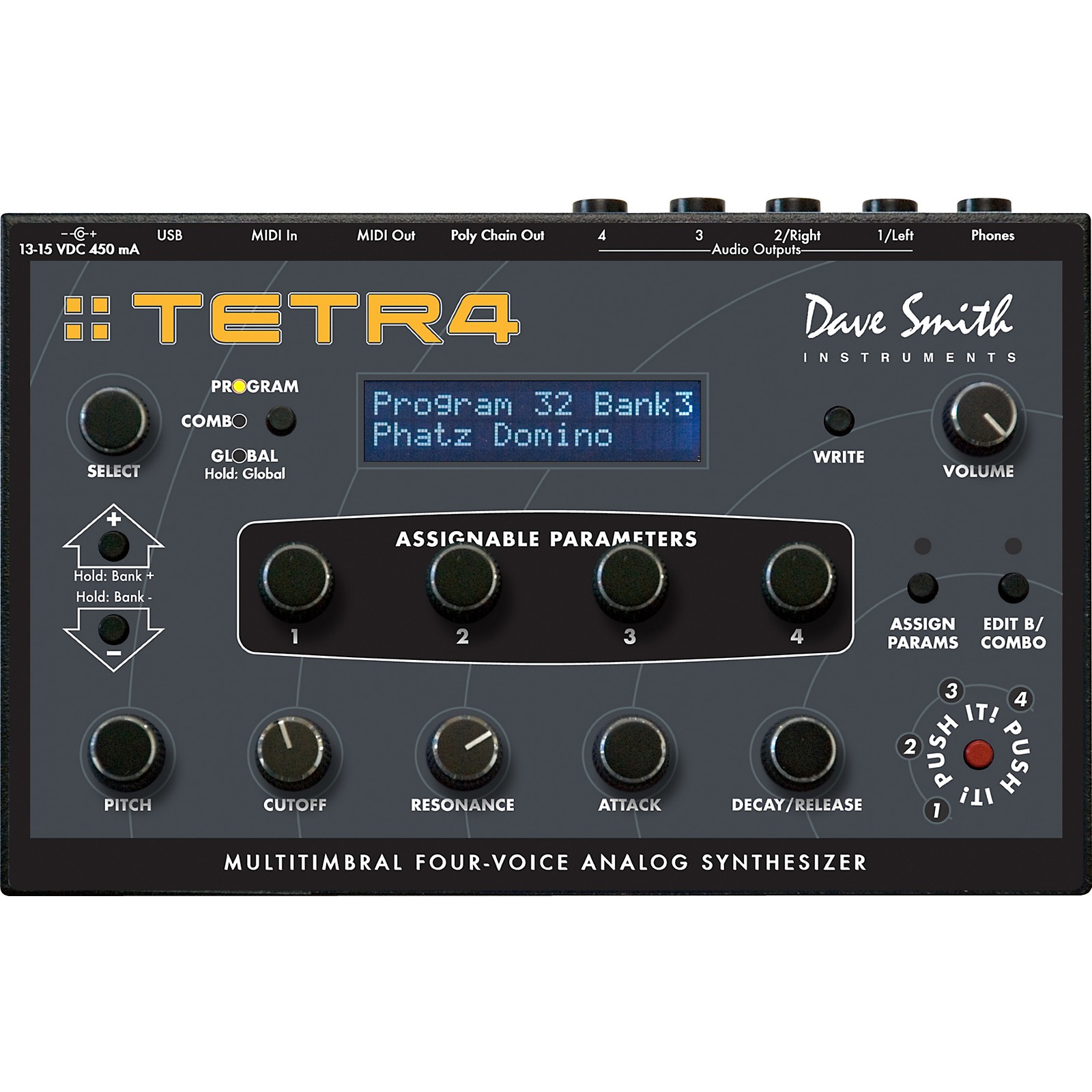 The Dave Smith Instruments Tetra Multitimbral Four-Voice Analog Synthesizer takes the award-winning sound and features of the Mopho, multiplies them ...Click To Read More About This Product

A 4-voice poly synth and 4-part multitimbral synth in one, with 100% analog circuitry.

The Dave Smith Instruments Tetra Multitimbral Four-Voice Analog Synthesizer takes the award-winning sound and features of the Mopho, multiplies them by 4, and packs them in a box less than a 1/2" larger.

Tetra has multiple personalities. It is a 4-voice, analog poly synth, plus it's a 4-part, multitimbral synth with separate outputs-essentially 4 Mophos in one very compact box. In addition, Tetra is a voice expander for other Tetras or Dave Smith Instruments' Prophet '08.

Outside the box
Physically, Tetra is similar to the Mopho, with 4 assignable parameter controls per program and a row of controls dedicated to the most commonly used performance parameters. All of the parameters can be accessed from the front panel and Tetra is fully programmable. Dave Smith Instruments offers a free, downloadable editor for Mac OS and Windows to make more comprehensive tweaking availaable.

Most of the rotary controls on Tetra are detented encoders, but the cutoff and resonance are potentiometers, for full sweeps with a single turn. The "push it" button is a manual trigger to play notes and latch sequences on without the need for a MIDI controller.

Audio is output in mono, stereo, or per voice through the four audio output jacks, plus there's also a headphone out. MIDI communication is by standard MIDI in and out jacks or USB. Poly chain out is a special, dedicated MIDI output to chain multiple instruments together for increased polyphony.

Under the hood
The voice architecture is based on the Dave Smith Instruments' Prophet '08, but with the addition of a sub-octave generator for each oscillator and a fully programmable feedback loop for each voice. That breaks down to two DCOs (digitally-controlled oscillators), a resonant low-pass filter, three DADSR (delay, attack, decay, sustain, release) envelope generators, four LFOs (low-frequency oscillations), deep modulation routing, an arpeggiator, and a 16 x 4 analog-style step sequencer per voice. Feedback is capable of producing effects ranging from mild distortion to fairly extreme harmonic instability. (That's a good thing.) The possibilities are nearly endless, and the audio signal path is 100% analog.

Tetra a la mode
In program mode, the Tetra is a four-voice, polyphonic synthesizer with four banks of 128 programs. As with the Prophet '08, each program contains two layers-each layer is essentially a separate patch-that can be used to create keyboard splits or stacked sounds. Banks 1 and 2 are the Prophet '08 factory programs; banks 3 and 4 are a combination of Mopho and new programs.

In combo mode, a different program can be assigned to each of the four voices. Combos can be used for mammoth unison patches or for triggering up to four different 16 x 4 sequences, each with its own program, simultaneously. Combos can also be used to create modular-style polyphonic patches, where each voice plays a different program with a slight variation on the same sound, or even a drastically different sound.

In multi mode, the Tetra becomes a multitimbral sound module capable of playing four monophonic parts on four MIDI channels, with separate outputs for each voice. Coupled with a MIDI sequencer and DAW (digital audio workstation), the Tetra can play complex arrangements or analog drum parts with each part individually processed and recorded to its own track.

This one goes to 12...and 16
Up to four Tetras can be poly chained for eight, twelve, or sixteen voices total. When used with a Prophet '08, up to two Tetras can be poly chained for a maximum of sixteen voices. In addition, the Prophet's front panel controls map directly to almost all of Tetra's parameters, so the Prophet acts as a programmer and control surface. Plus, a Mopho can be connected to Tetra's poly chain out for five-voice operation.