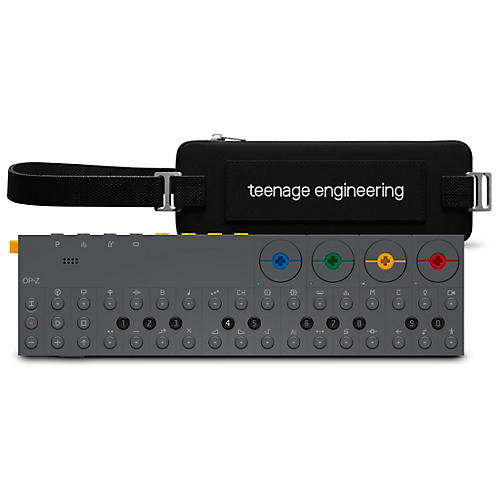 Join For Free
Share your location Order within 7 hrs 48 mins. 12 secs.
In Stock & Ready to Ship Orders placed before 3 p.m. ET usually ship the same business day (except weekends and holidays).
Ship to
Please enter 5 digits
Free Shipping Shipping and Delivery Times If we promise a delivery date and a delivery attempt is not made by this date, we will provide a refund of any shipping fees associated with your order. Questions? Call 800-449-9128
site1skuL81294000000000 true MFI=0 true Change Location

OP-Z synth and case in one kit.

Teenage Engineering OP-Z Portable Synthesizer and Sequencer
After over six years since its initial release, the follow up to Teenage Engineering's acclaimed OP-1 synthesizer is here. What was initially written off as a toy, the OP-1 has gone on to become one of the most unique and iconic synthesizers in the industry. Now the OP-Z pushes the boundaries of this iconic synth even further. Coming in at about half the size, with even more DSP than the OP-1, the OP-Z consumes less energy than its older brother, allowing you the ability to sequence songs across 16 tracks, just about anywhere you want to take it without the risk of running out of power.

Still, OP-Z is about a lot more than just composing music. The Z stands for the third dimension, the depth, the creativity involved in making music. Imagine animated art and videos that accompany your live show, or sequenced lighting, all the way down to composing your own interactive software. some people would call a device like this a dream machine. Teenage Engineering calls it the OP-Z.

16-Track Sequencer with Step Components
Centered around an advanced 16-track sequencer where all tracks run independently, OP-Z makes individual track speed and track length possible. In addition, you also have the ability to add unique step behaviors to every one of the 16 steps to create greater depth and complexity to your sequences. Think of this as dual layer sequencing where the first layer is a traditional 16 step sequencer, while the second layer adds variation per cycle, note variation, micro sequencing, direction, parameter changes, re-trig's and much more, all on just one single step

All 14 components have 10 values and behavior programs. The product of all this is that you have 140 ways to alter just one single step and to make step composing really intuitive and super-fast, all keys are backlit with multi-color LEDs with instant machine feedback, a must-have for poorly lit club gigs and late-night-in-bed composing. Actually, the print on the unit itself is made with a special glow-in-the dark-paint.

Bring Your Own Screen
OP-Z is a completely stand-alone synthesizer and composer, ready to be used at anytime and anywhere, but for those of you who need that extra injection of vibrant graphics, interactive user interface and awesome synced animations to feel inspired, the team at Teenage Engineering has introduced the concept of BYOS - bring your own screen.

Just download the OP-Z app on your phone or tablet, pair the two devices and you are all set. Add cellular connectivity, Wi-Fi and powerful graphics processing to that and the concept certainly makes sense. All this tech when connected to the OP-Z adds several unique features, like using the phone's camera, snapping a series of photos and arranging them to a beat, creating a synchronized music video.

Full Unity 3D Integration
Teenage Engineering have worked closely with Keijiro Takahashi and the Unity Tokyo studio to fully integrate OP-Z with the Unity Game Engine. as Keijiro-san is both a full-time software evangelist at Unity and a renowned VJ at night, the Teenage Engineering team has had access to a selection of Keijiro-san's personally developed tools which deliver stunning 3D graphics that run at full speed on iPhone or iPad. Keijiro-san's tool-set and real life experience in performances with motion graphics have been invaluable in making OP-Z an inspiring live tool for moving images in sync with music. One of the biggest challenges for a VJ has always been the creation of content. By exposing the inner control data of the OP-Z and linking it to Unity, users can create anything within Unity, build the project and just put the build into a Dropbox folder. Customizing every single polygon in a performance.

It You Don't Have Tape, It's Not OP
The tape feature is probably one of the coolest sonic features of the OP-Z. Imagine a short snippet of tape secretly recording everything that is programmed in the sequencer–all in real time. And with its own dedicated track it's possible to sequence the tape, trig the in-point, length and speed. OP-Z comes with a range of tape reels with unique character and functions scrub, scratch, wind-up and mess-up!

Get the OP-Z and keep it in it's case. Order today.