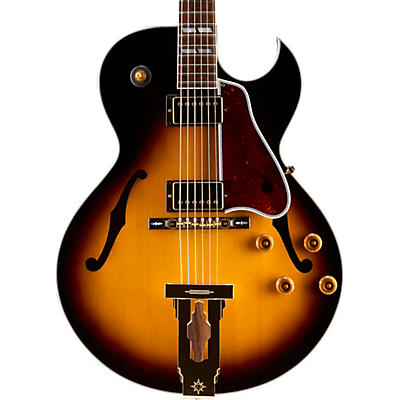 If you know Eddie Lang, then you know the Gibson L-4. He was one of many six-string virtuosos who adopted this archtop and contributed to its reputation as the greatest rhythm instrument on the jazz scene. And that wasn't even the beginning - the lineage of the L-4 actually goes back to 1911, and it gave Gibson a firm foothold on the guitar market even before the First World War. The very first L-4 guitars were acoustic instruments, but its evolution to an archtop electric hollowbody was completed by the late 1950s, and it's been that way ever since. Which makes sense, because once you've refined a guitar to perfection, why mess with it any further?

The L-4 is built from the ground up with uncompromising specs. For instance, the body woods are all carved: solid spruce for the top and solid mahogany for the back and rims. The fretboard is backed by mahogany, and comes in two materials: ebony on the Gibson Custom 2015 L-4 CES Mahogany Electric Guitar and L-4 CES Mahogany Hollowbody Electric Guitar in Wine Red, and rosewood on the Gibson Custom L-4 Electric Hollowbody in Ebony. Each of these instruments is decked out with a pair of '57 classic humbuckers and the strings are anchored to a trapeze-style tailpiece opposite tulip button Kluson tuners. And of course, Gibson has thrown in a fitted case and a certificate of authenticity to top it all off.

There's no denying that the lush and silky tone of Gibson's L-4 guitars has made a permanent mark on the music world. They're instruments in a class all their own, and they've earned a rightful place on the wish lists of musicians everywhere. If you're one of those musicians, then maybe the time has come for you to add a Gibson L-4 to your collection. You can't go wrong with one of the vintage workhorses of the guitar industry, after all, and it's a safe bet that once you're playing an L-4, it'll become a fast favorite.