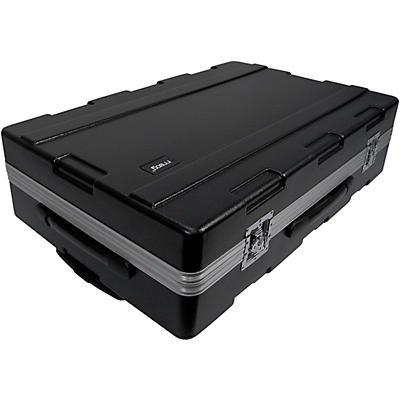 Moog Voyager Molded ATA Road Case with Handle Wheels & Moog...
1.0 of 5 stars (3)
Product Price  $298.00
{ "pageUrl":"MusiciansFriendApp://ProductListingsPage", "pageParams":"srcURL=/moog-voyager&N=25101" } 1 1 40
Inspired by the sounds of the Theremin, the Moog synthesizer was designed to harness and replicate the sounds of early electronic music inventor Bob Moog loved. Today, there isn’t a genre that hasn’t been given new life thanks to a Moog. From rock to classical and everything in between, Moog Voyagers offer such a captivating sound, you will love adding them to your next studio session or live show. First released as the Minimoog in 1970, this instrument’s unique sonic capabilities lead to it being featured on albums by artists as diverse as ABBA, Van Halen, and Michael Jackson. Over the years the Minimoog saw a few updates, but it wasn’t until 2002 that it was given a new name, the Voyager. The Voyager includes nearly all of the original Minimoog’s features, but includes many modern additions that make it a truly powerful instrument.

With a 100% analog signal path, ultra-stable oscillators, Moog ladder filters, plenty of onboard presets and room for expansion, Moogs such as the Voyager Performer Edition and the Voyager Rackmount Analog Synthesizer can easily tackle anything from thunderous Moog bass lines to pulsing pop precision. Moogs such as the Minimoog Voyager XL even take things a step further, incorporating most of the resources and features previously only found on early synthesizers that were massive and very difficult to transport. Tried and true features mixed with modern technology make the line of Moog Voyagers absolute dream machines for beginners and professionals alike.

The Moog Synthesizer is an iconic piece of equipment in the world of popular music. Today, artists such as FUN, Maroon 5, Radiohead, and CeeLo Green all make use of the Moog to produce the sounds we recognize and love. From humble beginnings to its near legendary status among music fans and musicians alike, the Voyager is unparalleled in the world of analog synthesizers.
{"sourceCode":"directsourcecode2","paginationNumber":"page 1","siteSection":"moog voyager","reportSuiteIds":"musiciansfriendprod","pageType":"product collection","displayPerPage":"30","countryName":"united states","sortByType":"best match","pageName":"moog voyager"}