Join For Free
Share your location Order within 7 hrs 48 mins. 12 secs.
In Stock & Ready to Ship Orders placed before 3 p.m. ET usually ship the same business day (except weekends and holidays).
Ship to
Please enter 5 digits
Free Shipping Shipping and Delivery Times If we promise a delivery date and a delivery attempt is not made by this date, we will provide a refund of any shipping fees associated with your order. Questions? Call 800-449-9128
site1skuJ32435000000000 true MFI=1 true Change Location 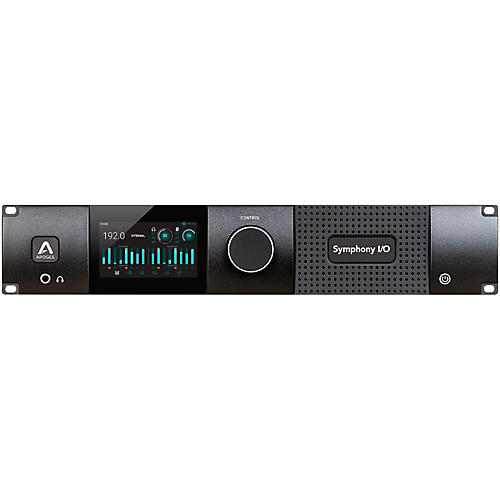 Input and Output Flexibility
There is a Symphony I/O Mk II solution for everyone; the home studio, project studio, commercial recording studio and scoring stage. Choose from four base I/O configurations, 2×6, 8×8, 16×16, or 8×8 with 8 mic preamps and easily expand as your studio grows. With two module slots and the capacity for up to 32 inputs and outputs of A/D & D/A conversion per unit, Symphony I/O Mk II offers the best per-channel value of any interface in its category.

Legendary Sound Quality
Apogee engineers have made it their passion to improve every new flagship product by using the latest in electrical components and designing optimized circuitry that often exceeds the expectations of the component manufacturer. This is the Apogee Advantage. Symphony I/O Mk II is the culmination of this 30 year commitment and raises the bar on all Apogee products before it with even better audio clarity and sonic transparency. In fact, when equipped with either the new 8×8 or 16×16 Mk II I/O modules, Symphony I/O Mk II outperforms all other multi-channel audio interfaces available for Pro Tools HD or Thunderbolt based systems, making it the flagship audio interface for the entire professional audio industry and the obvious choice for countless GRAMMY winning artists, producers, songwriters and engineers.

Thunderbolt
For connecting to a Thunderbolt equipped Mac running Logic Pro X or any other Core Audio compatible DAW. Up to 32 simultaneous inputs and outputs per unit/system and latency as low as 1.35 ms in Logic Pro X (96kHz / 32 buffer).

Front Panel Touchscreen with Comprehensive Control
All of Symphony I/O Mk II’s essential input and output settings can be accessed from the front panel touchscreen. Change your input selection, monitoring levels, mic pre gain or calibrate your Symphony I/O Mk II to match the levels of the other analog gear in your system.

A high-resolution TFT display delivers all the visual feedback critical for recording and monitoring. Without looking at your computer, Symphony I/O Mk II lets you see metering for up to 64 channels of I/O, 32 IN x 32 OUT – signal levels, polarity, muting, phantom power and Soft Limit.

Why do I need a good AD/DA converter?
Whether you record with a vintage Neve console, the best Neumann microphones or colorful mic preamps, a high quality AD converter is imperative to capture every nuance of your analog gear into your DAW. Without this, you will miss many of the subtleties and details that simply cannot be added back later with plug-ins. Similarly, the DA stage is essential to your perception of the recorded audio tracks. When mixing, regardless of what speakers you are using, if the converter is masking or having any effect on your audio, you could end up overcompensating with EQ, compression or other effects and failing to address other problematic details.

With Symphony I/O Mk II, you will hear more definition in each track and instrument of the mix, making it easier for you to make intelligent adjustments and achieve the ideal balance. Tracks will blend more harmoniously and mixing will simply be easier. The high end will be clear and not as brittle while the low end will be tighter than ever and more defined. This sort of unmatched audio quality can be noticed and appreciated by any listener.