We're sorry-this item is unavailable.
Contact our experts for a recommendation of great alternatives. Call us at 877-513-9645. 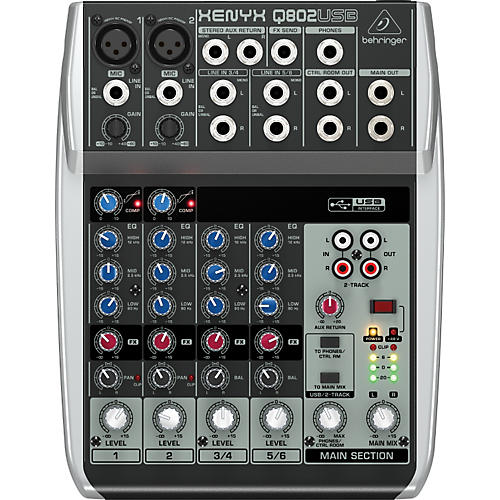 The Behringer XENYX Q802USB mixer is made to handle live gigs, and provide you with the required tools necessary to capture professional-quality recordings. Along with its built-in USB/audio interface, and "one-knob" mono channel compressor, the XENYX Q802USB mixer comes with enough recording and editing software to turn your computer into a complete recording studio. The second-most compact of the XENYX Q Series, the 8-input, 2-bus XENYX Q802USB has two phantom-powered XENYX mic preamps, making it possible to use up to two dynamic and/or studio-grade condenser mics. Onboard 3-band British EQ makes it easy to fine-tune any input signal and is available on both the mic and stereo channels. Another feature exclusive to the Q802USB is an FX Send control per channel, allowing you to use an external effects processor to add the finishing touch to your performance or recording. RCA CD/Tape I/O comes standard on all XENYX mixers.

XENYX Mic Preamps
All XENYX mixers have one thing in common; great-sounding, high headroom XENYX mic preamps. XENYX preamps offer 130dB of dynamic range with a bandwidth that extends from below 10Hz to well above 200kHz. As a result, XENYX mixers can reproduce a cleaner, transparent performance.

British EQ
The British consoles of the 1960s and ˜70s changed the sound of rock and roll. Without them, the British Invasion might not have even happened. Those legendary mixing desks soon became the envy of engineers and producers all over the world. The channel EQs on all XENYX mixers are based on that very same circuitry, allowing you to saturate signals with warmth and character. Even when applied generously, these equalizers exhibit forgiveness and superb audio quality.

USB Audio Interface
Modern technology has put personal recording well within the reach of virtually anyone with access to a computer. But how do you get all that music flying around your brain into a computer? Thanks to the built-in, bi-directional stereo USB audio interface, you can connect directly to your PC or Mac computer via a single USB cable. Now any signal source connected to the mixer can be recorded straight to your hard drive.

Included Software
Behringer has put together a massive software download that includes Audacity (the most popular open source audio editor), Podifier, Juice, Podnova and Golden Ear (a great selection of podcasting software). You're ready to go live on your PC or Mac right out of the box! You also get more than 100 virtual instruments and 50 FX plug-ins, turning your computer into a complete home-based or mobile recording studio.