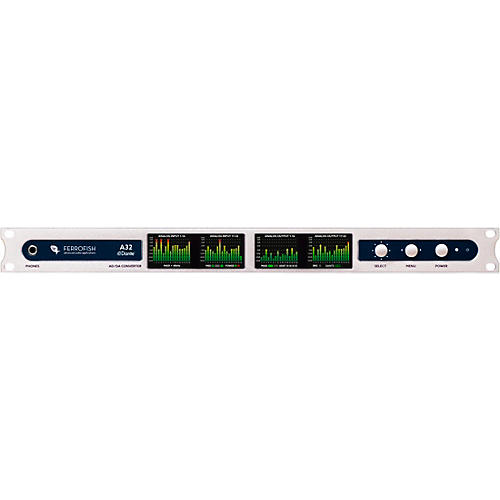 Ferrofish, a leading manufacturer of advanced audio solutions, proudly announces the introduction of the Ferrofish A32 AD / DA converter with support...Click To Read More About This Product

Ferrofish, a leading manufacturer of advanced audio solutions, proudly announces the introduction of the Ferrofish A32 AD / DA converter with support for Dante audio networking. Designed to streamline system cabling in both live and installed sound applications, the A32 Dante supports a wide range of audio formats, incorporates leading edge technology, and can also serve as a hi-end audio format converter.

With its Dante audio networking capability, the new Ferrofish A32 Dante makes a terrific choice for studio, live, and installed applications. By utilizing uncompressed, multi-channel digital media networking technology with near-zero latency and synchronization, the A32 Dante is designed to eliminate the unsightly and often trouble prone mass of cables utilized in large scale productions or AV installations. Dante does away with heavy, expensive analog or multicore cabling, replacing it with low-cost, easily-available CAT5e, CAT6, or fiber optic cable for a clean, lightweight, and economical solution over a single, standard IP network.

The A32 Dante supports a wealth of audio formats—making it an exceptional choice for a myriad of environments. The unit supports 64 channels of MADI I/O, 32 channels of ADAT optical I/O, and 32 channels of analog I/O. Additionally, any ADAT optical connector can be used alternatively as an S/PDIF or AES/EBU interface. Because of this wealth of I/O choices, the unit is also a very capable audio format converter while simultaneously functioning as an AD / DA converter. Audio can be freely routed (in groups of 8) between all interfaces. As an example, it is possible to use the first 32 Dante channels for converting to analog while using the remaining 32 Dante channels to connect the A32 Dante with ADAT equipment.