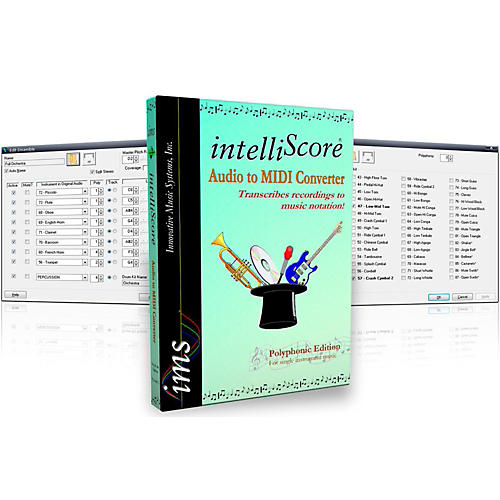 Join For Free
Share your location Order within 7 hrs 48 mins. 12 secs.
In Stock & Ready to Ship Orders placed before 3 p.m. ET usually ship the same business day (except weekends and holidays).
Ship to
Please enter 5 digits
Free Shipping Shipping and Delivery Times If we promise a delivery date and a delivery attempt is not made by this date, we will provide a refund of any shipping fees associated with your order. Questions? Call 800-449-9128
site1sku703767000000000 true Change Location

IntelliScore Polyphonic includes all the powerful capabilities of intelliScore Ensemble, except that it generates single-track MIDI files and is limited to working with music that contains one type of instrument, such as a piano solo or solo voice, and does not convert drum to MIDI.

Have you ever recorded a great melody for your band or a hot new lick, but now can't remember what notes you played or sang? Maybe youre looking for an easier way to get musical notation from recorded music?

Computer software has been available for many years to record music in the form of a MIDI file so it can be automatically converted into notation or edited in a sequencer. The catch is that the music had to be entered by hand or played in on a MIDI-enabled instrument, so you had to know how to play the song in order to create the MIDI file. If you had an unfamiliar piece and wanted to convert it to MIDI, you simply had no alternative but to succumb to the often tedious and time-consuming task of listening to a song over and over again to pick out all the notes by hand.

Finally, after many years of research, Innovative Music Systems has created software that converts recorded music to MIDI. Let intelliScore do the difficult work for you. Spend more time making music and less time figuring out the notes.

Convert your music in 3 steps:

1. Simply place an audio CD into your computer's CD drive or start with an MP3, WAV, WMA, AAC, or AIFF file. You can also play an instrument or sing directly into intelliScore by plugging a microphone into your computer.

2. Follow the instructions in the easy-to-use wizard. IntelliScore audio to MIDI converter listens to your music and helps transcribe it to a MIDI file containing the notes played, as well as chord names and key.

3. Now you can take the MIDI file and do things that ca be impossible with audio files. Use the included Anvil Studio or your favorite sequencer/notation software to: See the notation and clean up the conversion results, view and edit individual notes, and much more.