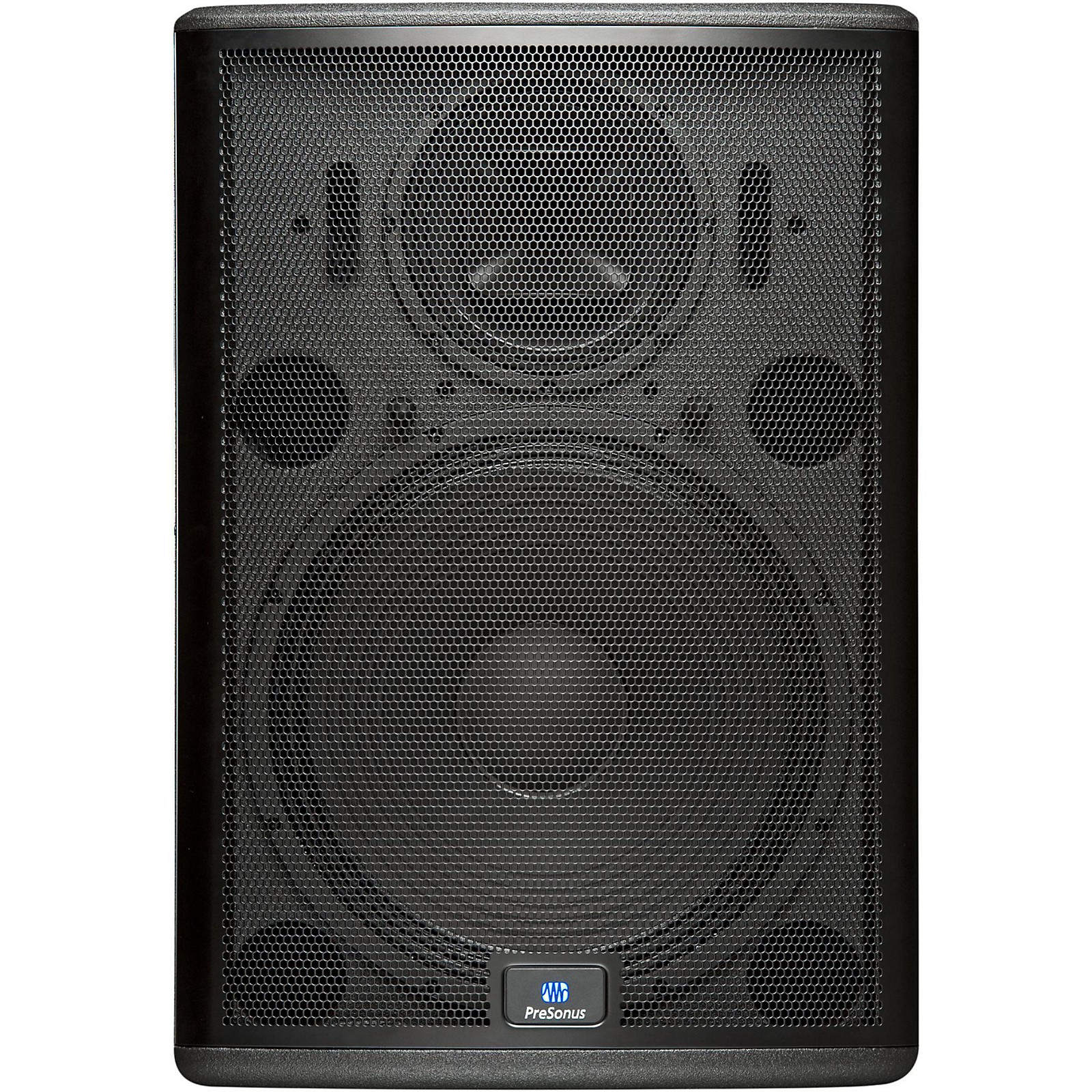 The ‹‹‹StudioLive 315AI delivers studio-monitor quality to high-demand live sound environments. Studio monitors are designed to accurately reproduce music across a broad spectrum without signal loss or distortion but they can't handle the SPL demands of a live show. Conventional PA speakers can deliver plenty of volume, but except for very high-end systems, they can't deliver the extremely clear, accurate sound one expects in a studio. The StudioLive AI-series Active Integration Loudspeakers can deliver studio-monitor accuracy on stage-at a price that's acceptable for most performing musicians. Using the exact same coaxial technology that's in the Sceptre active studio monitors, PreSonus was able to create a loudspeaker that performs just like a very large, loud and extremely accurate studio reference monitor. Combine all of this technology with sophisticated networking and iPad control, and your live mixes will never be the same!

Introducing the 315AI
The StudioLive 315AI is an active PA speaker system with a 15" ferrite woofer and an 8-inch midrange driver and 1.75-inch titanium compression driver that are configured in a unique coaxial design and are driven by 2,000 watts of triamped, Class D amplification (1,000W for the woofer, 500W for the midrange driver, and 500W for the tweeter). This unit is the ideal choice if you are not using a subwoofer.

The rear of the StudioLive AI-series full-range systems reveals a combo XLR/TRS line input and an XLR microphone input with an XMAX Class A mic preamplifier and 12V phantom power, as well as an XLR mix output. In addition to the input mixer, you get speaker level-attenuation control and USB and Ethercon connections.

The lightweight plywood enclosure is pole-mountable and has two ergonomic side handles, interlocking stacking, and M10 fly points. StudioLive AI-series full-range loudspeakers feature dual-position pole mounts that allow you to mount the speaker atop a stand at 90 degrees or at a 10-degree downward tilt. Using the downward-tilt mount will focus the loudspeaker's energy onto the audience and avoid destructive reflections. This is ideal for situations where the loudspeaker is mounted atop a tripod stand and placed on a stage or where the pole-mounted loudspeaker is on the floor and the coverage area is relatively shallow (conference, coffee house, etc.).

Coaxial design
Multi-way, non-coaxial speaker designs have long been the way to go in speaker applications. But they suffer from the changing relationship between the listener and the speaker elements: When you move around in the coverage area, the sound is inconsistent. Even more troublesome, the crossover point between the drivers can sometimes be audible.‹

Coaxial systems solve this by having the drivers on the same axis, thus providing a single point source for a consistent acoustic center. This results in symmetry of response on both the horizontal and vertical axis, at any given angle. The crossover transition is seamless (inaudible) at all angles. (By "symmetry," we mean that whatever response is observed at a given angle with respect to the axis, the same response will be observed at that angle in the opposite direction. The loudspeaker's behavior is "mirrored" about its axis.)

Temporal Equalization
No driver is perfect, nor can a driver be made perfect with hardware alone; there are always compromises in physical systems. To overcome these driver compromises, many speaker manufacturers apply DSP in the form of a combination of multiband EQs but the processing is more or less an afterthought-it's not accounted for in the design of the transducer. This sorta works-more or less. So instead of taking the crude, old-skool approach, PreSonus partnered with Fulcrum Acoustic and licensed its high-end TQ Temporal Equalization, which, up until now, could only be found in very high-end speaker systems.

With TQ, the basic speaker and enclosure designs meet the fundamental physical requirements for accurate, clear sound-characteristics that cannot be obtained with DSP. The TQ algorithms deal with the remaining issues using multiple fully addressable, fairly large Finite Impulse Response (FIR) filters to eliminate horn reflections and to correct linear time and amplitude anomalies. The hardware and TQ settings are designed to work together from the outset, rather than taking an existing speaker system and trying to correct it with DSP.

‹The future is Active Integration
‹‹Products that sense each other, interact and work together via wireless and wired communication, are seamlessly integrated with software, and run on extremely powerful CPUs-PreSonus has realized this dream with its new Active Integration technology. Active Integration incorporates communications, wireless networking, and huge amounts of DSP into a specialized, custom chip. Essentially, we've put a computer into these speakers, with enough processing power to handle not only the specialized TQ algorithms for tuning the coaxial system to near-perfection but also providing extensive remote control over system performance, EQ, and much more.

StudioLive AI series are the first PreSonus live-sound speakers to employ Active Integration technology, the same technology that is also at the heart of the StudioLive AI-series digital mixers and will be an essential technology in an entire ecosystem of PreSonus products in the future. Since StudioLive AI speakers have more DSP than a rack-mounted speaker-management system, you won't need any external processing devices. It's all built in, including graphic and parametric EQs, a delay, and a limiter, all of which can be controlled wirelessly.

PreSonus SL Room Control (coming Spring 2014*)
The master control center resides in SL Room Control, a rich, easy-to-use, system-configuration software application for Mac, Windows, and iPad that offers individual or group control of all StudioLive AI-series speakers on the network. Expected to be available in Spring 2014, SL Room Control gives you control over most onboard controls and lets you monitor key performance indicators.

Thanks to Active Integration, all of your StudioLive AI speakers-including satellite systems-are networked and operate as a truly integrated system. A Network Setup Wizard automatically detects each speaker and allows you to quickly connect to your wired or wireless network. Once connected, you can create, edit, save, and recall speaker-setup parameters.

*The PreSonus SL Room Control application will be available to users