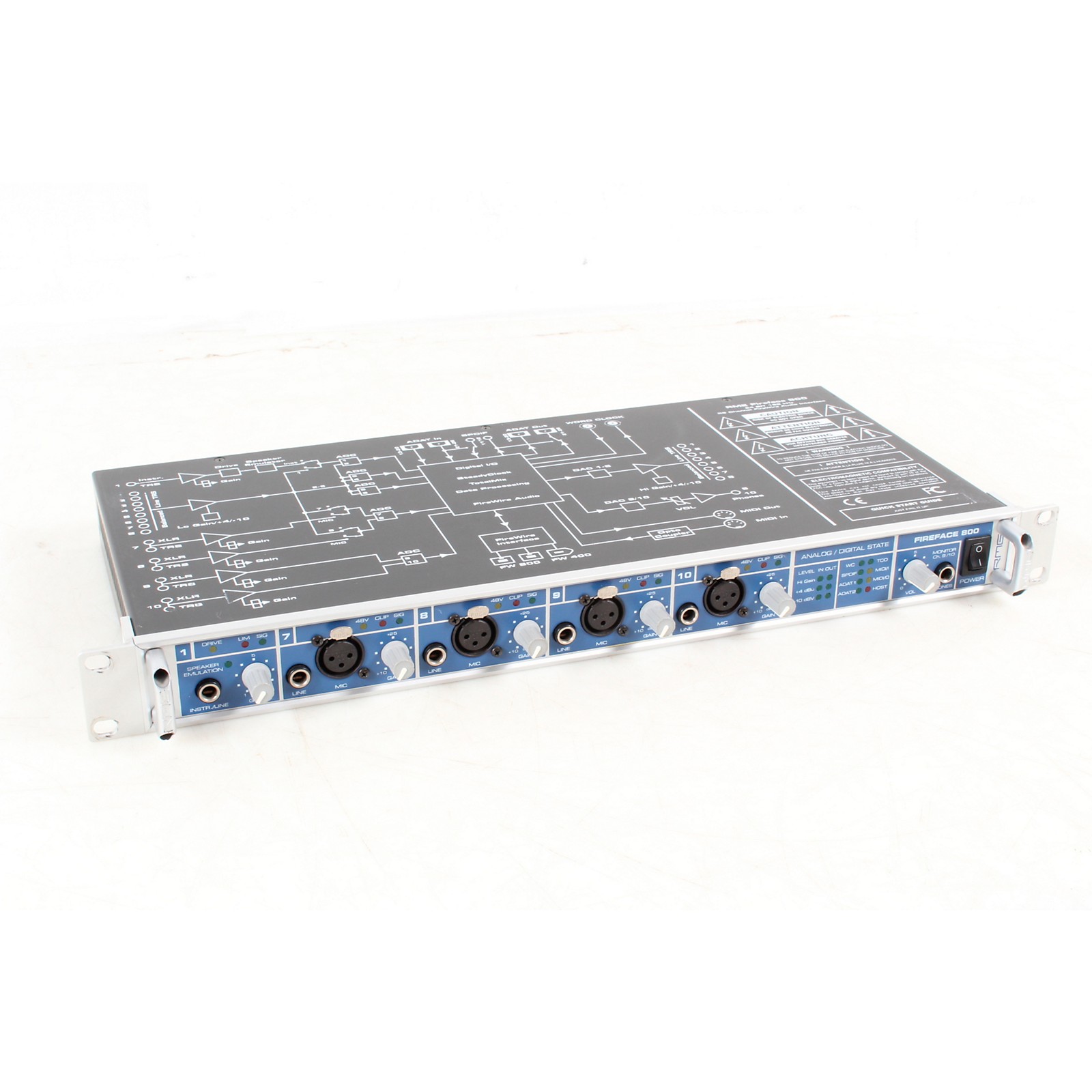 The RME Fireface 800 FireWire Computer Recording Interface offers 8 balanced line I/Os with software-controlled switching of the levels in the analog...Click To Read More About This Product

The RME Fireface 800 FireWire Computer Recording Interface offers 8 balanced line I/Os with software-controlled switching of the levels in the analog domain. All levels are under software control except the mic pre-amps and the headphone outputs. High-level A/D and D/A converter chips, I/Os that operate up to 192kHz, and 119 dBA dynamic range on playback speak to the stellar level of sound quality.

The front features 4 balanced mic inputs with class-A stage, 48V phantom power and individual jack and XLR inputs, which can also be used as additional line inputs. 2 of the 4 mic inputs are available permanently as channels 9 and 10, while the other 2 can be used together with or instead of inputs 7 and 8 on the rear.

A hi-Z instrument input for guitar and bass includes a soft-limiter, custom-tuned for musical instruments, that affords overload protection of the A/D-converter. The limiter's harmonic distortion can be used for tube-like distortions. A special circuit delivers fuzz-box-type guitar distortions. A multi-stage filter hi- and low-frequency filter lets you clean up the sound as desired.

The FireWire 800's digital I/Os include 2 ADAT I/Os for connecting and inserting effect devices, mixers, or external converters. The 192kHz SPDIF-I/O works concurrently with 10 analog in- and outputs at the highest sample rate, plus 2 digital ones. All inputs and outputs are active at the same time. For example, the instrument input can be used either instead of, or together with, the line input on the back. The jack and the XLR sockets of the mic inputs can even be used simultaneously. To summarize, up to 35 signal sources can be connected to the Fireface 800 and recorded to 28 separate tracks.

The DSP-based TotalMix mixer derives from the popular Hammerfall DSP series, with all inputs and outputs having the ability to be freely mixed, distributed and routed. Up to 14 completely independent stereo submixes are possible. The internal flash memory enables all settings including TotalMix to be recalled on startup. The device also works stand-alone as a submixer, A/D and D/A converter, headphone mixer, format converter, instrument or mic pre-amp, and monitor mixer.

The SteadyClock sync and clock technology enable the unit to be used as a sync reference for your whole studio. SteadyClock refreshes clock signals and removes jitter. A time code option (TCO) for synchronizing to LTC, video and VITC can be added with the insert slot on the back.

The Fireface 800 has a second port for hub functionality, a bi-lingual mode for full FireWire 400 compatibility, and an additional FW 400 port. With the multi-ports, several Fireface 800s can be used in parallel and at the same time with no problems.