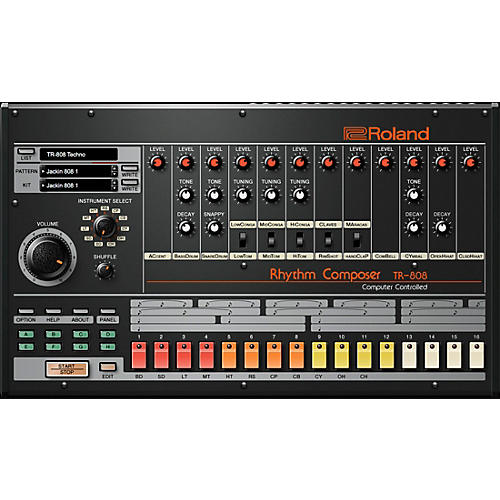 Join For Free
Share your location Order within 7 hrs 48 mins. 12 secs.
In Stock & Ready to Ship Orders placed before 3 p.m. ET usually ship the same business day (except weekends and holidays).
Ship to
Please enter 5 digits
Free Shipping Shipping and Delivery Times If we promise a delivery date and a delivery attempt is not made by this date, we will provide a refund of any shipping fees associated with your order. Questions? Call 800-449-9128
site1skuL77750000000000 true Change Location

The 808 has been making inspiring beats for yours, and now you can add it to your DAW.

Note: This is a download version of TR-808 only. Not a physical copy.

The TR-808 Software Synthesizer is a detailed replica of the legendary TR-808—one of the most revered and sought-after electronic music instruments of all time. The plug-in version offers the sound and behavior of the original, plus new features that virtually modify the hardware for more sound choices and faster, more fluid programming.

"It’s almost impossible to imagine the modern musical landscape without the distinctive sounds of the Roland TR-808 drum machine.”—Rolling Stone

A Legend in the Making
In 1980, the Roland TR-808 Rhythm Composer was released as a quick and easy songwriting tool for musicians. At the time, the high cost of memory drove Roland engineers to use analog synthesis instead of samples for its sounds. Through a series of happy accidents, they utilized unique transistors, creating a one-of-a-kind sound that set the 808 in its own sonic universe. However, it didn’t exactly deliver “traditional” or "realistic" drum sounds, leading to it being dismissed by many at the time, with only about 12,000 units ever made.

The Thing That Goes Boom Once a few adventurous musicians and producers got their hands on the TR-808 and started tweaking those knobs, the world began to (literally) feel the impact it would leave on music forever. For decades since, the sizzling hi-hats and snappy snare, the clicky rim shot, the unmistakable cowbell, and yes—that booming bass drum—have been heard on worldwide hits and underground classics.

That 8 Oh 8
Increasingly revered by musicians and producers around the globe, the TR-808’s influence only continues to grow. New musical genres make heavy use of the 808 sound, with some utilizing it as the main instrument and defining sound of the style. Its influence is so deep that it’s been name-dropped in famous songs, had albums dedicated to it, had bands named after it, and even been the subject of a feature-length documentary film. For some younger music fans, the 808 is no oddity—it’s simply “what drums sound like.”

Plug In Your Own TR-808
Original TR-808 units sell for huge sums on the used market, and its sound is often imitated with sample-packs and knockoffs. But the 808 is a complex beast and far more than the sum of its parts. Using proprietary  Analog Circuit Behavior technology, Roland painstakingly recreated the original analog circuits that are the essence of the TR-808’s sound. The Roland TR-808 plug-in sounds identical to the original—with all its nuance and detail—while adding some groundbreaking new features:

• Tuning and decay on each instrument and the ability to overdrive the internal circuitry update the 808 for modern sounds
• The classic 808 step sequencer expands with lanes for each sound, so you can program faster and more fluidly
• Each pattern has eight variations for evolving sequences that keep things interesting
• Drag-and-drop audio or MIDI patterns directly from the 808 into a project
• Adjustable flams, sub-steps and soft hits create detailed fills and ratcheted sequences
• Each instrument has its own “last step” and shuffle settings so you can play with timing, experiment with complex meters, and dial in just the right groove

Hardware Integration
This TR-808 software instrument integrates seamlessly with Roland's TR-8S Rhythm Performer and TR-08 Roland Boutique hardware (sold separately). Transfer TR-8S patterns directly into the TR-808 plug-in or create beats on the go and send them back to the hardware. Or you can use the TR-8S or TR-08 for direct hands-on control of the plug-in.

Join Roland Cloud today for the famous boom and sizzle of the 808, along with a host of other  legendary Roland  instrument . Curious to hear what came after the 808? Check out its  equally influential  sibling and a dance music staple: the  TR-909.

Drop some fresh beats with help from the classic drum machine in virtual form. Order now.