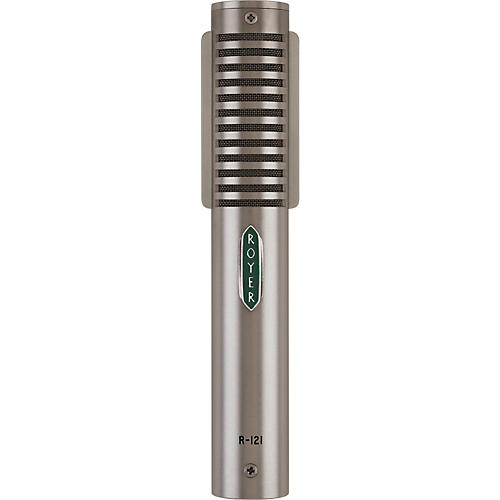 Join For Free
Share your location Order within 7 hrs 48 mins. 12 secs.
In Stock & Ready to Ship Orders placed before 3 p.m. ET usually ship the same business day (except weekends and holidays).
Ship to
Please enter 5 digits
Free Shipping Shipping and Delivery Times If we promise a delivery date and a delivery attempt is not made by this date, we will provide a refund of any shipping fees associated with your order. Questions? Call 800-449-9128
site1sku581141000377000 true MFI=4 true Change Location

The R-121 is Royer's flagship microphone and the world's first radically redesigned ribbon microphone. Royer did away with the large, heavy, fragile, "classic" approach to ribbon microphones and went in a completely new direction. The R-121 gives all of the warm, natural tonal response for which top engineers have always loved ribbon mics, but in a compact, lightweight, higher output, tough-as-nails package that was unheard of in a ribbon mic before the Royer R-121.

Like many of the best-loved classic ribbon mics, the R-121 has a figure-8 pattern, sensitivity in the dynamic mic range, and a warm, realistic tone and flat frequency response. But that's where the similarities end. By using advanced materials and a blend of cutting edge and old-school hand-build construction techniques, the R-121 is a far more versatile and user-friendly ribbon mic that can stand up to the most demanding tasks, including live stage use. It's built solid enough for Royer to give it a lifetime warranty. The R-121 redefined ribbon microphones so thoroughly that Recording magazine wrote "...the Royer R-121 is destined to become one of the classic microphones of the 21st century".

Patented Offset Ribbon Technology
The R-121's proprietary offset ribbon transducer (Patent Number: 6,434,252) is the first of its kind, positioning the ribbon element closer to the front (logo) side of the microphone. This arrangement gives the ribbon more room to move within the prime magnetic field while maintaining full frequency response during high SPL recordings. It's an integral piece of the magic of all Royer R-series microphones.

Recording With The R-121
Tonally, the Royer R-121 microphone hears things the way your ears hear them. Most microphones add their own characteristics to your recordings; some have a hyped high- and low-end response with scooped out mids; some are super sizzly in the highs; some accent midrange and give very little upper- and lower-end frequency response; and some respond to nothing but low end. They all serve a purpose and have their place in recording and live work. But if you've ever heard something brilliant ” an unbelievable electric guitar, an inspiring trumpet, a sweet flute, an amazing kit ” and found that getting that sound to tape or hard drive was impossible, you owe it to yourself to try a Royer ribbon. The R-121's response is flat and well balanced; low end is deep and full without being boomy; mids are well defined and realistic; and the high-end response is sweet and natural sounding, never edgy or sibilant.

On playback you'll find the sound is natural and alive, with a panoramic, ambient feel much like what you heard when you were standing in the room with the instruments(s) you were recording.

Recording LOUD!
Need to record at insane levels? No problem! The R-121's maximum SPL rating is 135dB at 20Hz and it can handle that for years. In practical terms, that means you can put your R-121 directly in front of a souped up 100-watt Marshall and open it up without microphone distortion or damage to the ribbon. Royer doesn't recommend trying this with other ribbon mics, but the R-121 was built to take it.

Two Mics In One
At distances of three feet and closer, the back of the Royer R-121 records slightly brighter than the front side. This can be extremely useful when recording acoustic guitars, vocals, and other sound sources that you may need a slightly brighter response on.


What the pros are saying about the R-121
:
I'm using R-121's all over my guitars and drums - it's really an amazing mic." Noel Golden (Engineer - Matt Serletic, Matchbox 20, Willie Nelson, Edwin McCain)

"The R-121 blew me away in 1999 and now I'm blown away again. The increased gain and the clarity of the R-122 is ridiculous - this is an amazing development in ribbon microphones!" Ross Hogarth (Grammy winner - Jewel, Roger Waters, Keb Mo, Coal Chamber, Black Crowes, REM, Shawn Colvin)

"I use Royer ribbons every day I record. They're like the AC-30 of the microphone world. They just have this desirable thing that works so well and gives a truly analog vibe to digital recordings." Steve Kempster (Scoring Engineer - Trevor Rabin, Mark Mancina)

"These are the first mics I've ever used on guitars that give me exactly what I want. Huge low end with no eq." Jerry Finn (Green Day, Rancid, Blink-182, Pennywise)

"I first used my pair of R-121 's on every song on Jewels 'Joy' album. Since than I've used them on everything from main orchestra mic's to the outside mic of kick drum's (great bottom end for free). Basically, I'm using them on everything I can." Michael O'Reilly (Mixer/ Engineer - Jewel, Whitney Houston, Smashing Pumpkins, Bette Midler)

"I just had seven R-121's up on the Academy Awards, then used them all on a Quincy Jones big band session - Royer mics are one of the very best things to happen to recording in years."
Tommy Vicari (Grammy & Emmy Award winner, Quincy Jones, George Duke, Gino Vannelli)

"Royer microphones bring back to digital recording what was lost in the process of going from analog tape to digital formats."
Bryan Carlstrom (Producer/Engineer - The Offspring, Alice In Chains, White/Rob Zombie, Social Distortion, Anthrax, PIL, Project 86)

"Royer has come up with a unique design that allows me to record guitar amps at full volume without compromising the sound. I love the way it allows me to put all the low end warmth onto tape."
Eddie Kramer (Jimi Hendrix, Led Zeppelin, Kiss, Mott the Hoople, Traffic, Anthrax, Derek & the Dominos, Peter Frampton, John McLaughlin, John Mayall, Carly Simon, Johnny Winter)

"At last - a ribbon microphone that reproduces the low end of a guitar amp without blowing the ribbon, even in close proximity. The R-121 gives a perfect natural reproduction of string instruments."
Eddie DeLena (Stevie Wonder, Red Hot Chili Peppers, John Mellencamp)

"Royer mics give you the closest thing to the natural sound source on tape as any mics I have ever used before."
John Jorgenson (Hellecastors, Elton John)

Record with the go-to mic of the elite audio professionals. Order today!