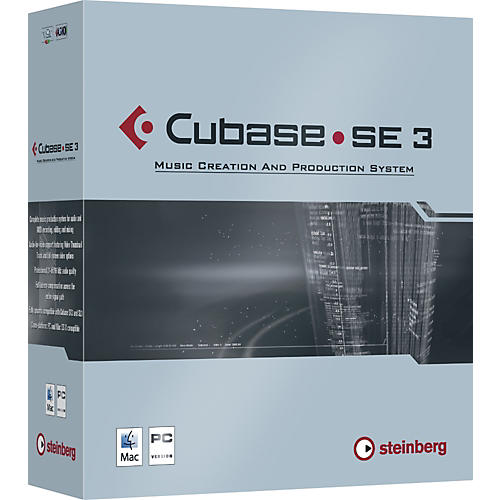 Get the look and feel of Cubase SX3 and the same 24-bit/96kHz audio engine as Nuendo 3 at an amazing price!

With powerful tools for composing, recording, editing, and mixing, Cubase SE 3 software is your entry-level ticket to the world of computer-based music production. The latest member to join the Cubase product family, Cubase SE 3 shines with the same user interface and award-winning VST Audio Engine as Steinberg's flagship Cubase SX3. And that means when it comes to audio quality and intuitive handling, Cubase SE 3 rivals its bigger brothers. Any way you choose to use it - as a sequencer for your home recording studio or a multitrack recorder for the band rehearsal room - with Cubase SE 3 you get the real deal at an unbeatable budget price.

All new in version 3
Featuring a thoroughly revamped user interface, Cubase SE 3 is powered by the latest VST 2.3 Audio Engine. What's more, this music software ships with many new features, including extended hit-point recognition for synching loops up to the song speed and automatic latency compensation for plug-ins.

Enhanced user interface (look and feel of SX3)
Courtesy of its revamped user interface, Cubase SE 3 now handles even easier and more conveniently. You can color-code tracks and mixer channels just like in the higher-end Steinberg Cubase versions, which makes working with large projects much easier.

VST 2.3 Audio Engine
Powered by the award-winning VST 2.3 Audio Engine, Cubase SE Version 3 now features the same audio technology as Cubase SX3 or Nuendo 3. This includes full, automatic latency compensation for plug-ins. Regardless of how many virtual effects or instruments you load, the timing remains precise sample for sample.

Workflow
Cubase SE 3 now features detailed refinements in the Project window, and its tool bars and editors offer automatic chord recognition and key correction. The Info line lets you edit several events simultaneously. MIDI files are easily dragged and dropped into an existing or new project. With individually variable Pre-Roll and Post-Roll times, musicians will find it easier to punch in and out of recordings

Working with loops
Another key innovation in Cubase SE 3 music production software is its enhanced hit-point recognition capability. It now recognizes rhythmic audio material such as drum or percussion loops with greater speed and precision. Upon conversion, these loops may be synched up individually to the respective song speed. This facilitates your production efforts, particularly when working with loop libraries. To this end, Cubase SE 3 supports all standards audio file formats.

Basics
Hallmark features of Cubase SE 3 include an intuitive interface and exceptional ease of use. With Cubase SE, you'll find it very easy to stay on top of the action and quickly achieve the desired results.

Project window
As the primary window in Cubase SE 3, the Project window affords you a view of the arrangement and its various tracks. The Project window is fully scalable; you can hide and show tools and display panels at will to adapt the window to the requirements of the task at hand.

You may enter track settings directly in the Track Inspector, a panel at the left of the Project window that you can show and hide on demand. It provides access to all of the selected track's key control elements and parameters, including all mixer settings and plug-in routings/assignments. To gain a better view of complex arrangements, you can mix individual tracks down using special folder tracks.

Workflow
Cubase SE 3 was developed specifically to enable efficient, ergonomic handling that is easily personalized to satisfy your requirements. Keyboard shortcuts are available for nearly all functions in Steinberg's Cubase SE 3. You can assign these key commands freely and export the entire set if you want to use your personalized key commands on other systems. If you wish to jump quickly to specific locations within an arrangement, you can put various markers in place. You can undo the most recent ten actions in Cubase SE, which grants you the freedom to experiment and keeps the creative flow going.

File management
A clearly ordered file management system is vital when you're working on complex projects. This is what the Pool in Cubase SE 3 is here to do--it serves to manage all the audio files and video clips in a given project. Numerous functions are available for importing clips, converting file formats, renaming and auditioning files, and so forth.

With the help of fully automatic hit-point recognition, tasks such as adapting a drum loop to the song tempo are accomplished in just a few steps. In Cubase SE 3, editing audio material is a fundamentally non-destructive operation. This means that the original, unedited audio file is always retained.

MIDI sequencing
Designed for discerning composers and musicians, Cubase SE 3 software offers versatile, easy-to-use tools and editors for MIDI sequencing and composition. You can import MIDI parts via drag & drop or play on a connected keyboard MIDI and record parts directly. Various highly versatile editors put numerous tools at your fingertips; they afford you access to every conceivable MIDI parameter for purposes of further processing.

Key editor
The graphical Key audio editor lets you intuitively generate and process notes and other MIDI events such as velocity or MIDI controllers. What's more, you can create a tailored drum map for every instrument used in the arrangement so that percussion instruments are indicated with their proper names and can be edited accordingly.

Score editor
The Score Editor lets you view and edit MIDI data as musical notation. A few clicks are all it takes to adapt the view to show recorded MIDI performances correctly and print them on demand. Handy functions such as display quantization and transposition make this task even easier.

Drum editor
The Drum Editor was developed for special drum sequencing tasks--complete drum tracks can be easily created here with only a few mouse clicks. An individual drum map can be created for each instrument in the project.

MIDI effects
Cubase SE 3 offers numerous MIDI effect plug-ins for every MIDI track, including creative tools such as a powerful yet simplified variant of the SX version's Arpeggiator, a MIDI Pattern Sequencer*** and a MIDI Chord Processor***, as well as functional plug-ins such as a MIDI compressor for equalizing velocity variance and a Context Gate for selective MIDI data triggering/filtering. Fourteen different MIDI effect plug-ins are available. You can insert most effects directly while playing and of course automate them as well.

Full automation
Every mixer knob may be automated. Cubase SE 3 supports numerous external controllers that let you ergonomically control the VST Mixer and intuitively record fades and pans. You can also set up any other MIDI controller as a generic control device and use it to handle the Cubase Mixer and adjust the parameters of VST instruments and effect plug-ins intuitively and ergonomically by simply twisting hardware knobs.

Professional export options
With the Export function, you can save the finished mix in almost all standard formats, for instance, AIFF, Sound Designer II, Wave, MP3, Ogg Vorbis and Windows Media Audio. By bouncing tracks offline, you can save considerable time when creating comparison mixes.

Automation
Steinberg Cubase SE 3 software ships with easy-to-use automation functions. You are free to automate nearly all mixer and effect parameters. The same goes for VST instruments, regardless of whether they are integrated plug-ins or third-party vendors' instruments.

As a rule, you have two options for automating parameters:

Drawing automation envelopes
Every track in the Project window contains automation sub-tracks for all automatable parameters of the given track type, which you can show and hide on demand. You can draw and edit automation envelopes directly in the panel. You have various line and curve tools at your disposal to do this.

Delay Plug-ins - DoubleDelay generates two separate delays that can be synched up to the song tempo on demand, while the ModDelay plug-in lets you modulate these delays.

Filter Plug-ins - For purposes of creative sound-shaping, you have the StepFilter at your disposal. This pattern-driven filter serves to generate rhythmic, pulsating filter effects.

Modulation Plug-ins - Complementing the classic Chorus, the Symphonic plug-in combines a chorus effect with a stereo spread and an auto-panner that synchronizes with the song tempo. The Flanger and Phaser are on board to provide further classic modulation effects.

The Rotary plug-in - Simulates the archetypal effect of one or more rotating speakers as frequently used for organ sounds. Steinberg's powerful variant offers a separately variable woofer and tweeter with a variable crossover frequency and adjustable microphone positions to boot.

Alongside the conventional Ringmodulator plug-in, which lets you shape a signal using amplitude modulations, you have Tranceformer at your disposal. This ring modulator effect modulates the amplitude of incoming audio material via an internal variable frequency oscillator, thereby generating complex distortion of the harmonic spectrum.

Other Effect Plug-ins - If you're looking for hip lo-fi effects, look no further than the Bitcrusher and Grungelizer plug-ins. Bitcrusher reduces an audio signal's bit rate, while Grungelizer adds hiss and ambient noise to recordings. The UV22 is a plug-in featuring a dither algorithm developed by Apogee. Rounding out its effects arsenal, Cubase SE 3 offers a classic Vocoder as well as Chopper, a combination tremolo and auto-pan effect.

Video
With the benefit of the Video Thumbnail Track and the support of numerous video formats, Cubase SE 3 is an excellent tool for composing movie soundtracks and scoring videos. Like the top-of-the-line Cubase SX3, Cubase SE 3 also offers powerful options for underscoring images with music. It supports numerous standard formats (AVI, MPEG, Quicktime and many more) to ensure utmost compatibility with all types of video files. You may opt to view video material in a freely scalable video window within Cubase SE 3 or, in combination with the requisite video hardware, on an external monitor.

Cubase SE 3 offers a special type of video track. Video files are as easy to insert as audio files, for example, via drag & drop. You can view the video's individual frames directly in the track as thumbnails, which tremendously facilitates composing soundtracks with image-by-image precision.