Join For Free
Share your location Order within 7 hrs 48 mins. 12 secs.
In Stock & Ready to Ship Orders placed before 3 p.m. ET usually ship the same business day (except weekends and holidays).
Ship to
Please enter 5 digits
Free Shipping Shipping and Delivery Times If we promise a delivery date and a delivery attempt is not made by this date, we will provide a refund of any shipping fees associated with your order. Questions? Call 800-449-9128
site1skuH74201000000000 true MFI=0 true Change Location 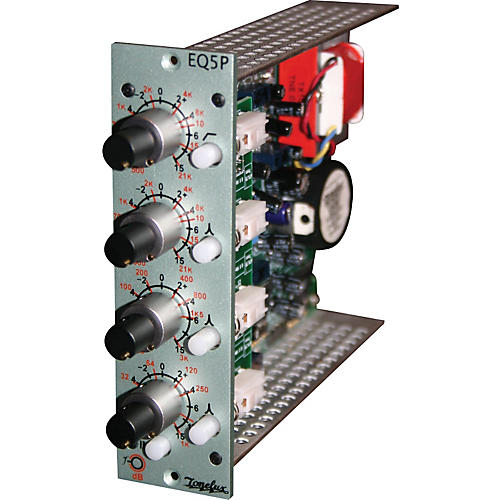 Unique parametric equalizer from the mind of Paul Wolff.

-The Tonelux EQ5P is a discrete parametric equalizer with some very unusual features. One thing you'll notice is that the panel has no "Q" control. The filter Q control works in relation to the Boost and Cut control, using a constant energy curve or "proportional Q," which keeps the bandwidth wider at lower boost/cut levels, and becomes narrower at higher boost/cut levels. The results are more musically pleasing than other designs. The curve is identical to many classic equalizers and is one of the reasons the classics are preferred over newer designs. When the Peak button is pressed, 3 yellow peak buttons keep the width at a constant 1/3 octave for precision control.

The high-frequency section has a shelving button instead of a peak button. Since the constant energy curve is so broad in the lower frequencies, there is no need for a low frequency shelf button.

With control for 4 bands, the frequency range of the lower 2 are slightly different, allowing the lowest band to go down to 16Hz, while the upper 2 bands are identical. The In button is a silent In/Oout button that does not bypass the unit, but it bypasses the filters.

The "Input" of the V4 is the normal EQ input at a +4 dBu level. The "Insert Return is a padded input, making the nominal level +10 instead of +4. This can be used when the input level going into the EQ is too hot.

Mix outside the box with large format console sound thanks to space-saving, cost-effective 500-series EQ from Tonelux. Order today!