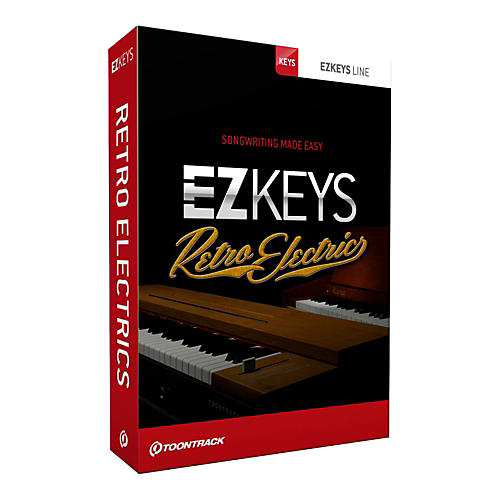 Join For Free
Share your location Order within 7 hrs 48 mins. 12 secs.
In Stock & Ready to Ship Orders placed before 3 p.m. ET usually ship the same business day (except weekends and holidays).
Ship to
Please enter 5 digits
Free Shipping Shipping and Delivery Times If we promise a delivery date and a delivery attempt is not made by this date, we will provide a refund of any shipping fees associated with your order. Questions? Call 800-449-9128
site1skuH99304000000000 true Change Location

EZkeys is a revolutionary plug-in and standalone instrument that combines a world-class piano player, songwriting partner, arranger and a meticulously sampled instrument - all in one package! Aside from breathtakingly rich tonal qualities, EZkeys allows the user unlimited creativity through its groundbreaking functionality.

Drag & drop MIDI
EZkeys comes with an extensive MIDI library performed by a professional session pianist. Played with increasing complexity in full song sections and covering all major genres such as Rock, Pop, Country, Gospel, Blues and Funk, this library is not only a creative boost, it's an untapped source of inspiration for your yet unwritten songs. Drag, drop and lay down the foundation to a track in no time!

Smart songwriting features
EZkeys includes a host of revolutionary and creative songwriting features. Transpose full MIDI tracks on the fly, use any MIDI file and transform it with playing styles found in other MIDI, use the groundbreaking EZkeys Chord Wheel to customize chord voicing and harmonic color with just one mouse-click - and much, much more.

The sounds
EZkeys Retro Electrics includes two carefully captured and timeless electric pianos, the Clavinet D6 and the Pianet N, both from the classic German manufacturer Hohner. These two instruments are world-famous for their distinct sound and have been perpetuated in numerous hits from the golden ages of funk, soul and British Invasion. Even though production has stopped long ago, the complex and round sound of the Pianet and the bright staccato of the Clavinet keep resonating vividly in all corners of contemporary music production, making these Hohner classics every bit as relevant in any songwriters toolbox today as they were back when it all started.