Join For Free
Share your location Order within 7 hrs 48 mins. 12 secs.
In Stock & Ready to Ship Orders placed before 3 p.m. ET usually ship the same business day (except weekends and holidays).
Ship to
Please enter 5 digits
Free Shipping Shipping and Delivery Times If we promise a delivery date and a delivery attempt is not made by this date, we will provide a refund of any shipping fees associated with your order. Questions? Call 800-449-9128
site1skuL81212000000000 true MFI=3 true Change Location 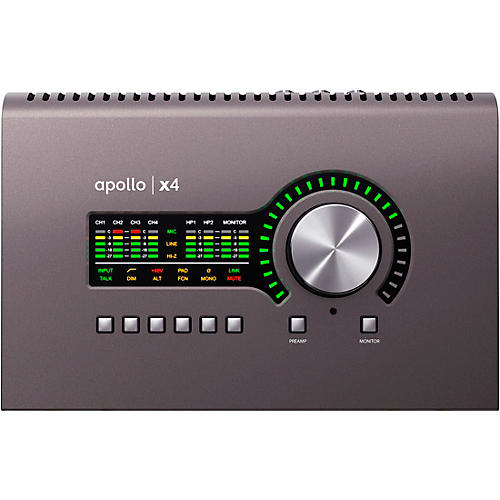 Packed with features, plug-ins and more.

Apollo x4 Heritage Edition comes with 10 premium award-winning plug-in titles valued at over $2,400—including the full suite of UA's Teletronix, 1176, and Fairchild compressors, Helios Type 69, V76, and UA 610 mic preamps, all Pultec EQs, Oxide Tape Recorder and Pure Plate Reverb. These premium Heritage Edition titles are in addition to the Apollo x4's included "Realtime Analog Classics Plus" bundle, giving you the most accurate library of classic analog emulations included with any professional audio interface. A hallmark feature of Apollo is its Realtime UAD Processing, letting you run the full library of UAD plug-ins at near-zero latency.

With thousands of hit songs and hundreds of Grammy-winning albums under their belt, Apollo interfaces are used to create exceptional-sounding records every day. To improve upon the previous generation, UA engineers redesigned the Apollo x4’s audio conversion to deliver a striking 127dB dynamic range and -117 dB THD+N, giving it a spacious, organic sound that easily rivals dedicated high-end converters costing much more.

Users of Apollo x4 Heritage Edition can combine up to four Thunderbolt-equipped Apollos and six total UAD-2 devices—adding I/O and DSP as your studio grows. Once you expand your studio with an Apollo X rackmount unit, you can use Apollo x4 as a desktop monitor controller with additional I/O and DSP power.

For the special-edition audio interface for all your recording needs. Order today.