Join For Free
Share your location Order within 7 hrs 48 mins. 12 secs.
In Stock & Ready to Ship Orders placed before 3 p.m. ET usually ship the same business day (except weekends and holidays).
Ship to
Please enter 5 digits
Free Shipping Shipping and Delivery Times If we promise a delivery date and a delivery attempt is not made by this date, we will provide a refund of any shipping fees associated with your order. Questions? Call 800-449-9128
site1skuL81214000000000 true MFI=1 true Change Location 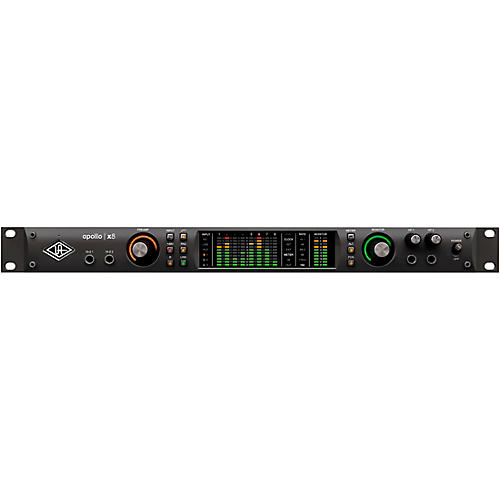 Packed with features for all your recording needs plus a premium suite of plug-ins.

Apollo x8 Heritage Edition comes with 10 premium award-winning plug-in titles valued at over $2,400—including the full suite of UA's Teletronix, 1176 and Fairchild compressors, Helios Type 69, V76 and UA 610 mic preamps, all Pultec EQs, Oxide Tape Recorder and Pure Plate Reverb. These premium Heritage Edition titles are in addition to the Apollo x8's included "Realtime Analog Classics Plus" bundle, giving you the most accurate library of classic analog emulations included with any professional audio interface. A hallmark feature of Apollo is its Realtime UAD Processing, letting you run the full library of UAD plug-ins at near-zero latency.

With comprehensive surround monitoring support for formats up to 7.1, Apollo x8 Heritage Edition is a boon for engineers and producers working on audio and music for video games, television and the web. In addition, Apollo x8 Heritage Edition offers selectable +24 dBu operation for out-of-the-box compatibility with professional mixing consoles and other high-end pro audio equipment.

For versatility, power and a library of effects. Order today.