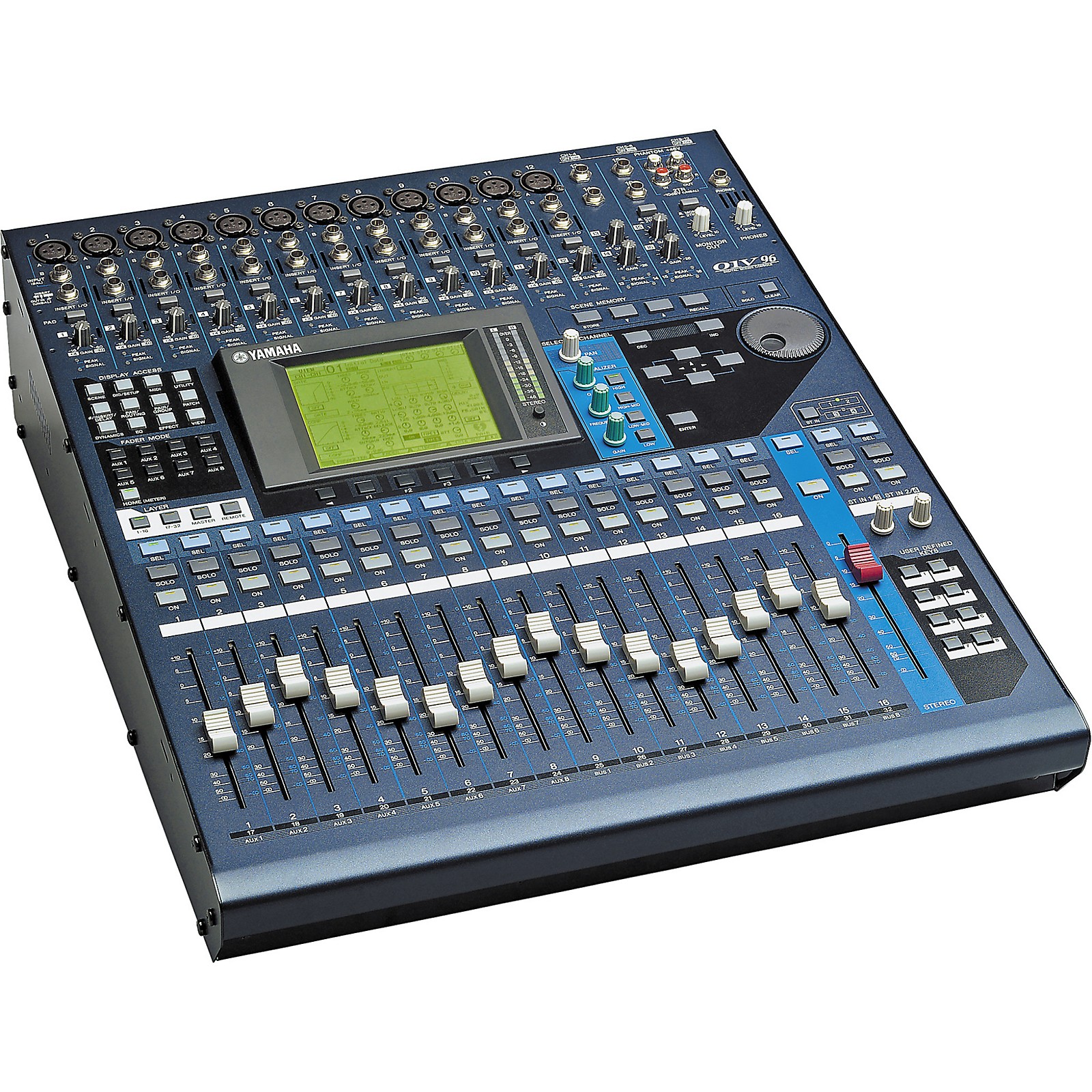 The 01V96VCM delivers the performance and reliability of Yamaha's acclaimed digital live sound and production consoles in a remarkably compact design...Click To Read More About This Product

The 01V96VCM delivers the performance and reliability of Yamaha's acclaimed digital live sound and production consoles in a remarkably compact design that is perfect for home and professional applications where space is limited or maximum portability is required. It may be small but it can handle up to 40 inputs, and can be cascaded if more are required. And now, in addition to the many improvements that were implemented in the 01V96 Version 2, the 01V96VCM comes with a selection of Yamaha's unsurpassed VCM effects built in. Of course the entire console - effects included - features 24 bit/96 kHz operation for ultimate resolution and sound quality that will satisfy the most demanding applications.

40-input 18-bus Mix Capacity at 96 kHz
Although it is a compact rack-size mixer, the 01V96 offers generous mixing capacity with up to 40 simultaneous inputs. All 40 input channels include four-band parametric EQ and up to 452 milliseconds of delay with variable feedback, while all channels except for stereo inputs 1 through 4 also provide a gate and compressor/limiter. What's more, all of this functionality is available at 96 kHz. The output section also offers plenty of versatility with 18 buses: 8 group buses, 8 auxiliary buses, and a stereo bus. Group buses 1 through 8 also function as surround buses, and a Bus to Stereo function allows sound-reinforcement type sub-mixing. A "Fix" function automatically sets the auxiliary buses to nominal (0 dB) level, so they can be used as additional mix buses.

Versatile Connectivity and Expandability for a Wide Range of Applications
Inputs 1 through 12 feature high-performance head amps that accept microphone and line-level sources, with 20-dB pads, -60 to -16 dB gain trim and balanced XLR and TRS phone jack connectors. Phantom power is switchable in 4-channel groups. Inputs 13 through 16 accept line-level sources via balanced TRS phone jacks, with trim adjustable from -20 to +10 dB as two stereo pairs or four independent mono channels. Analog outputs include the main stereo outs, stereo monitor outputs, a stereo 2-track output, four "omni" outputs, 12 channel insert outputs, and a phones output. All analog inputs and outputs employ precision 24-bit, 96-kHz converters. Digital I/O is provided via 8-channel optical ADAT and coaxial 2-track inputs and outputs. The 01V96 also features an I/O expansion slot that accepts Mini YGDAI (Yamaha General Digital Audio Interface) cards that support up to 16 additional channels of I/O in analog or digital (AES/EBU, ADAT, or TASCAM) format. The 01V96's inputs and outputs can be freely assigned via a flexible digital patching system that allows the console to be optimally configured for a wide range of music production and sound reinforcement applications, as well as installations.

Powerful Channel Functions with Flexible Control and Patching
All 32 mono channels, the four stereo channels, eight group buses, eight auxiliary buses, and stereo bus feature powerful functions inherited from the DM2000 and 02R96. All mono channels include gate and compressor dynamics processing, while mono and stereo channels offer four-band parametric EQ, channel inserts, delay, surround and stereo panning, and phase. These same features with the sole exception of gating are also provided for the eight group and auxiliary buses as well as the stereo bus. Easy-access dedicated controllers are provided for EQ and panning. Control data is graphically displayed via an LCD screen, and can be saved in "libraries" for easy recall whenever recalled. All inputs, outputs, insert patch points, direct outputs, and effect sends and returns can be freely patched to configure the system as required via graphical on-screen "digital patching" displays: for example, you could patch one input to multiple channels, or assign the signal from one bus to multiple outputs.

Four Advanced Multi-effect Processors at 44.1/48 kHz, or Two at 88.2/96 kHz
In 44.1/48 kHz mode the 01V96 offers four high-performance stereo multi-effect processors that deliver the same quality as the effect processors provided on the DM2000, 02R96 and DM1000. A total of 44 presets include reverb, delay, chorus, and distortion programs. Original effect settings can be stored to any of 76 user library locations. The internal effects can be patched as send/return or insert type effects.

01V96 Editor Software Supplied
The 01V96 comes supplied with an advanced 01V96V2 Editor that runs on the Studio Manager application for Windows or Mac computers. The 01V96 connects to your computer via the TO HOST interface (USB), creating a production environment that goes beyond simple parameter viewers. The Console Window, Selected Channel Module, Patch Editor, Effect Editor, and Library Window can be accessed via the computer's expansive color display, and the main mixer functions can be edited offline. Memory management functions allow 01V96 data to be transferred to and from the computer where it can be managed and even shared via LAN or the Internet.

Comprehensive Interface with Large LCD, 100-mm Motor Faders, and Dedicated Scene Memory Keys
A large 320 x 240 pixel LCD display clearly displays parameters and metering. 16 faders provide access to the console's 32 mono channels in two layers: 1 through 16 and 17 through 32. Add the stereo master and you have a total of 17 top-quality 100-millimeter motor faders. The bus and auxiliary faders are provided in a third layer, and a fourth "remote" layer is provided for external device control. The remote layer is user assignable, allowing you to place any desired combination of inputs and/or buses in a single layer. The four stereo inputs have their own dedicated controls. Physical keys are provided for scene store and recall for fast, efficient scene management. Fade time can be individually specified for each channel, while recall safe can be specified for each channel and function. Your 01V96 data can even be managed on your personal computer using the supplied 01V96 Editor application.

Versatile Pairing and Grouping Functions Enhance Mixing Efficiency
In addition to "horizontal pairing" of adjacent channels, the 01V96 allows "vertical pairing" of channels on different layers so that, for example, you can control up to 16 stereo sources from a single layer. Grouping functions include the familiar fader and mute grouping, as well as sophisticated EQ and dynamics grouping. The latter can be a great advantage when mixing surround sound.

Sophisticated DAW or Digital Recorder Integration
In addition to its extensive stand-alone capabilities the 01V96 can integrate with your computer-based DAW (Digital Audio Workstation) or digital recorder to create an advanced digital production environment. The 01V96 can function as a physical controller for both recorder and mixer sections of your DAW. The standard library includes control compatibility with Digidesign Pro Tools and Steinberg NUENDO workstations, and the General DAW mode supports a range of other DAW systems. MIDI control tables can also be created to provide functionality with MIDI-compatible DAW systems.

01V96 Cascade Link and Other Advanced Capabilities
The 01V96 Cascade Link function allows two 01V96 consoles to be connected to provide up to 80 input channels. The 01V96's light weight and compact rack-mountable size make it an unbeatable choice for a range of recording, live sound, and installed applications. A worthy member of the Yamaha digital production console lineup that includes the DM2000, 02R96 and DM1000, the 01V96 offers features and performance that are ideal for professional use. Important details include on-screen gain-reduction metering for dynamics processing, global recall safe, and password-protected console operation lock.

The 01V96VCM includes the Channel Strip package with COMP276, COMP260, and EQ601 effects that bring vintage analog compression and EQ to life in the digital domain. It also includes the same REV-X algorithm that is behind the unmatched performance of Yamaha's stand-alone SPX2000 signal processor, delivering the most natural reverb, and ambience available anywhere.

Compressor 276 (mono)/Compressor 276S (Stereo)
Recreate the fast response, frequency characteristics, and tube-amp saturation of the most in-demand analog compressors for studio use.

The REV-X Hall and REV-X Room programs have a very open sound, while REV-X Plate delivers a brighter tonality that is ideal for vocals.
All models deliver dense, warm reverb that does not interfere with the natural timbre of the source.

Free Version 2 Download Enhances 01V96 Functionality
In conjunction with upgrades to other Yamaha digital production consoles, Version 2 Firmware for the 01V96 has been made available as a free download. This upgrade provides a significant range of additional and enhanced functions including Add-on Effect support, enhanced DAW control, and virtual VCA for live sound. A complete list is provided below.

Seamless ADD-ON EFFECTS Support
01V96V2 provides full support for four ADD-ON EFFECTS packages (each package is sold separately). The advanced effects and signal-processing capabilities provided by these packages are accessed and operated via the console's internal effect processors in the same way as the built-in effects.

A Major Studio Manager Evolution
The Studio Manager application has undergone a major evolution, and is now a host application that can support multiple editors (such as the DM2000 Editor and SPX2000 Editor) within its framework. This offers many advantages including total project recall, and future support is planned for recall from Steinberg Media Technologies GmbH's Nuendo/Cubase via the Studio Connections. Online and offline editing of multiple 01V96 units is now smoother than ever. A variety of other enhancements include Add-on Effect support, multiple windows, and improved overall operability through shortcuts, keyboard operations, drag and drop, and using the console's User Defined Keys to remotely open and close windows.