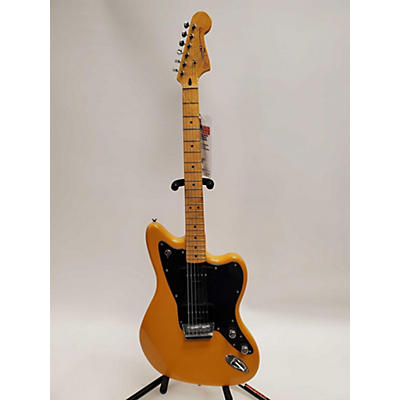 The Squier Vintage Modified Series from Fender offers a new take on the familiar designs of classic electric guitars and basses that have inspired players for generations, with custom-style modifications like hot-rodded pickups, upgraded hardware, modern neck profiles, and distinctive finishes. When Leo Fender first introduced the Telecaster and the Precision Bass in the early 1950s, he revolutionized not only the way musical instruments were produced, by utilizing assembly line techniques, but modern music as well, as there had never before been solidbody electric guitars and basses readily available and affordable enough for the average musician's budget. They caught on quickly, followed by the Stratocaster, Jazz Bass, and numerous other innovative instruments, and were soon heard on hits by everyone from Buddy Holly to Jimi Hendrix. Over the years, some players began to modify their instruments, by adding humbucking pickups, whammy bars and custom paint jobs. Now Squire ups the ante by offering super-affordable souped-up versions of these classic axes right out of the box. The series includes tricked-out versions of everything from the iconic Telecaster, Stratocaster and Precision Bass to beloved siblings like the Mustang, Jaguar and Jazzmaster. For instance, the Telecaster Special sports a Duncan Designed Jazzmaster neck pickup and vintage-tint Jazzmaster maple neck for a truly cool-sounding and versatile hybrid axe. Other Teles in the series include the Custom, with a modern C shaped neck with a 9-1/2 radius fingerboard, a humbucking pickup in the neck position, and dual volume and tone controls; the Deluxe, which boasts dual humbuckers; and the semi-hollow Thinline, ready to jangle with an f-hole on the upper bout and a shorter, Gibson-style 24-3/4 scale length. The Strat comes in several flavors, including the '70s model, with basswood body, three screaming Duncan Designed single-coil pickups, and that funky '70s headstock; the tonally diverse HSS version with a beefy humbucker in the bridge position and two Stack for Strat pickups in the middle and bridge; and the way-groovy Surf model, with lipstick-tube pickups and retro-cool colors like Candy Apple Red, Sonic Blue, and Surf Green. Other cool axes in the series include the 24 scale Mustang, with its distinctive floating bridge/dynamic tremolo system and slider switches; the similarly short-scaled and whammy-barred Jaguar, with its innovative dual-circuit on/off and tone control switching system, also available as a hard-tailed (non-whammy), dual-humbucker-loaded beauty with concentric volume/tone controls; and the Jazzmaster, with the familiar whammy system and dual-circuit switching and controls, as well as a pair of hot Duncan Designed P-90-style pickups, and also available as a hard-tail. For basses in the series, Squire offers everything from the Jaguar Bass Special SS (Short Scale), with 30 scale length, to full-sized Jaguar, Mustang, Telecaster, Precision and Jazz Basses, in versions closely resembling their Fender cousins, or Special versions with hybrid pickup combinations and other unique features, as well as Jazz Bass V 5-String, '70s, and Fretless models. Many of these Modified models are available in left-handed versions, so no matter how you fret, you don't need to worry - there's a Squier Vintage Modified made just for you. Order it today!