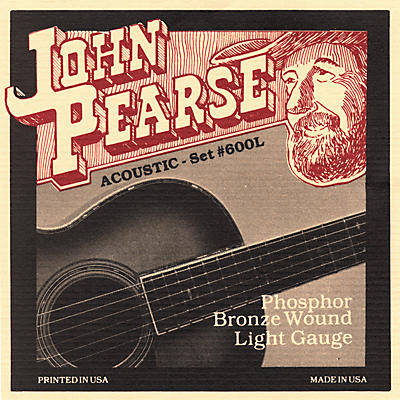 There's no shortage of elements influencing the sound of a stringed instrument. From fretting techniques to the style and construction of the instrument itself, even the smallest change can make a huge difference. The biggest impact on your sound will always come from how you play, of course, but the second-biggest is undeniably the strings. That's why you need to have a great set, and thanks to their specialty in acoustic folk instruments, John Pearse strings are fantastic choices for any musician with traditional tastes.

If you're a fan of British folk music, then you've probably heard of John Pearse. But if you haven't, here's a primer. John was only 19 when he released his first instructional material: a booklet and accompanying album called "Teach Yourself Folk Guitar." Starting in 1965, Pearse taught a generation of musicians the basics of guitar through his BBC series "Hold Down a Chord." After that, he spent a decade as one of the most sought-after session guitarists in the U.K. and Germany, before moving to the United States in 1978 to design products for the C.F. Martin Company.

It was with all that experience under his belt that John Pearse eventually branched out to make and market his very own family of strings, which started a tradition that carries on today. You'll find an impressive selection of bronze strings here to make your acoustic guitar really shine, not to mention several weights of banjo and mandolin strings as well. Looking for something made especially for your resonator guitar? Give the John Pearse 3000 Resophonic Strings a try. These nickel-wound strings are renowned in bluegrass circles for their great sound.

Genres like folk and bluegrass are all about the simple things: memorable melodies, a passion for music and the desire to tell stories through song. The best part about these musical styles is that they're open to anybody, and whether you're a beginner joining the community for the first time or an experienced player looking for strings inspired by one of folk's greatest artists, John Pearse strings will surely impress you with their character and sound.