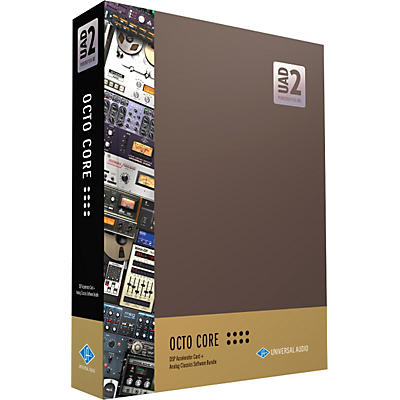 Being a world-class producer or sound engineer takes a great deal of practice and dedication to your craft. Of course, your recording, mixing and mastering talents are a lot easier to bring to the forefront when you're armed with award-winning UAD powered plug-ins - and for that, Universal Audio has just the answer. Their most powerful DSP accelerator to date, the Universal Audio UAD-2 Octo is a one-of-a-kind desktop unit that's compatible with Thunderbolt and Thunderbolt 2-based Macs. Make no mistake, there's no telling how far you can broaden your production horizons when you have the Universal Audio UAD-2 Octo at your disposal.

In this catalog, you'll find more than one UAD-2 Octo package - but for the sake of kickstarting your search, we'll suggest the UAD-2 OCTO Core PCle SSP Accelerator Package. Featuring 8 SHARC processers, this unit is a cinch to install into a PCLe-equipped desktop computer or compatible expansion chassis. It can be used with Pro Tools, Logic Pro, Cubase and Live; plus, it comes with an "Analog Classics" plug-in bundle that features Legacy editions of the LA-2A Classic Audio Leveler, 1176LN/117SE Classic Limiting Amplifier and RealVerb Pro plug-ins. Now for those who want even more options, there's an UAD-2 OCTO Core PCle SSP Accelerator Package in this section with even more treats to supercharge your production creativity. This second UAD-2 Octo choice includes a custom software bundle that lets you "pick any 3" UAD plug-in titles within 45 days of registration.

Whatever package you ultimately choose, you can expect a massive boost in audio quality and mix processing power after you set yourself up with Universal Audio UAD-2 Octo. These plug-ins are the result of Universal Audio's DSP engineers working with the original manufacturers of classic analog equipment, and you better believe it shows. The only thing left to do now is choose a package and watch your studio wizardry soar.