Join For Free
Share your location Order within 7 hrs 48 mins. 12 secs.
In Stock & Ready to Ship Orders placed before 3 p.m. ET usually ship the same business day (except weekends and holidays).
Ship to
Please enter 5 digits
Free Shipping Shipping and Delivery Times If we promise a delivery date and a delivery attempt is not made by this date, we will provide a refund of any shipping fees associated with your order. Questions? Call 800-449-9128
site1skuJ06375005000088 false MFI=1 true Change Location 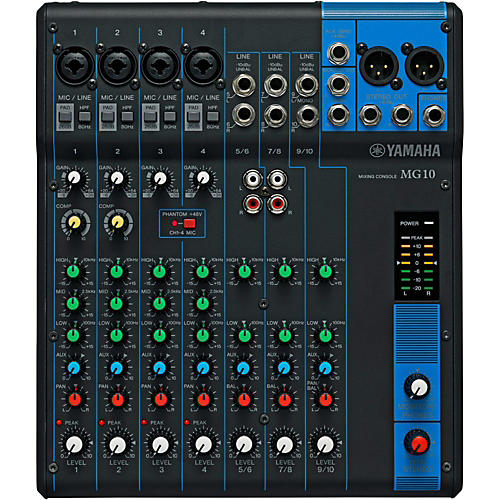 Mixer with compression and effects.

Now in its third incarnation, the MG Series embodies the pursuit of design excellence, and incorporates some of the same technologies developed for use in high-end professional consoles, including studio-quality preamps, powerful digital processing, and a rugged, reliable construction. The Yamaha MG10 is a 10-Channel Mixing Console with four mic (XLR hybrid) and 10 Line Inputs (4 mono + 3 stereo), one Stereo Bus, and one AUX send.

Order today and solve your mixing challenges on a budget.