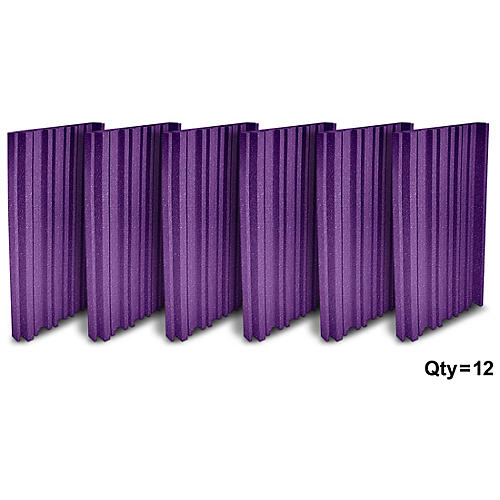 Join For Free
Share your location Order within 7 hrs 48 mins. 12 secs.
In Stock & Ready to Ship Orders placed before 3 p.m. ET usually ship the same business day (except weekends and holidays).
Ship to
Please enter 5 digits
Free Shipping Shipping and Delivery Times If we promise a delivery date and a delivery attempt is not made by this date, we will provide a refund of any shipping fees associated with your order. Questions? Call 800-449-9128
site1sku472386000002000 false true Change Location

At the summer NAMM Show in Nashville, TN, where the Studiofoam Metro was first shown, it generated even more "oohs" and "aahs" than Auralex hoped it would. Quite literally dozens and dozens of people - from magazine editors to big-name recording artists - termed the Metro "Really Cool!" It seems the market was ready for the looks and performance of the new Auralex Metro.

The first thing you notice about the Metro is its unique appearance. With what may to the uninitiated seem like a random landscape of plateaus of varying depths, widths and heights, the Metro certainly stands apart from the look of other absorbent foams the marketplace has become familiar with over the past few decades. It's common knowledge that many major brands of acoustic foams exhibit poor consistency from panel to panel, so inventing a panel contour that offered an upscale appearance and superior panel-matching characteristics was a definite priority during the Metro's design phase.

Aside from offering a unique visual appearance that has already been embraced by upscale houses of worship, corporate users, recording facilities and more, there is definitely sound acoustic thinking behind the Metro's surface contour.

It is for these reasons that, for those users who desire an upscale look and effective modal control without having too much sonic energy removed from their room via excessive mid/high absorption, Auralex feels the Metro is darned near the ideal solution, effectively offering both absorptive and diffusive mid/hi band benefits from one product.