Join For Free
Share your location Order within 7 hrs 48 mins. 12 secs.
In Stock & Ready to Ship Orders placed before 3 p.m. ET usually ship the same business day (except weekends and holidays).
Ship to
Please enter 5 digits
Free Shipping Shipping and Delivery Times If we promise a delivery date and a delivery attempt is not made by this date, we will provide a refund of any shipping fees associated with your order. Questions? Call 800-449-9128
site1skuL84953000001000 true MFI=0 true Change Location 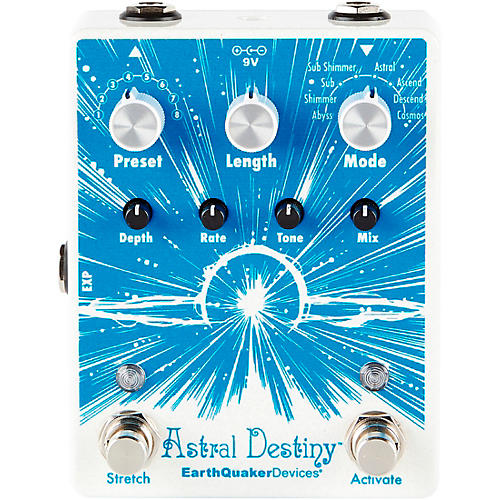 Craft unique reverb from a choice of modes and controls.

The EarthQuaker Devices Astral Destiny octave reverb pedal adds dimensions to your reverb choices that allow you to lift your sound to a whole new plane of musical existence. Once upon a time, if you were a performing musician who wanted reverb, your only choice was a tank full of sproingy springs. Not that there's anything wrong with that, but modern technology and the crafty designers at EarthQuaker Devices have come up with a plethora of reverb options to help you craft giant sonic landscapes that are more than just spacious. We think the Astral Destiny pedal is impressive, not just for its outer creative edges, but also for the solid reverb base it starts from.

The Astral Destiny pedal is on a different level thanks to its pitch effects. The capacity to add octave up, octave down and other pitch effects to the fundamental huge, rich reverb creates effects that range from subtly haunting to over-the-top madness. Add an octave up for shimmer, and octave down for depth, or both for a full-bandwidth reverb onslaught. Whichever you choose, you can also add upward or downward pitch bending that's controllable via expression pedal. There's also a setting that allows a pitch shift of a fifth to be added to the reverb tail. That's all before you start playing with the chorus effect. There is a lot of depth (chorus joke) to explore here.

Put a twist on it

With eight user-editable presets and eight reverb modes, the possibilities for sonic design get extreme. The expanded control available from the "Stretch" foot switch and the previously mentioned expression pedal kicks everything up another notch. Stretch lengthens reverb decay temporarily, while adding a programmable pitch bend. The expression pedal is user assignable to Depth, Length, Rate, Tone or Mix, and can have a different assignment for each preset. We think that the available range of sounds from this pedal is astounding, and promises to keep you discovering inspiring new sonic textures for a long, long while.
More than just a guitar pedal

The EarthQuaker Devices Astral Destiny has more applications than just being part of your pedalboard. For all you synth-heads out there, the Expression jack also responds to control voltage, making it a powerful addition to your modular or analog synth setup. It's easily applicable to lo-fi mixes, vaporwave (if you're still doing that), and sonic madness for TikTok clips, in addition to more traditional pedal uses.

Take your reverb to the next level

One of the things we've always loved about EarthQuaker Devices is their penchant for taking effects we've used for years and finding something new. Whether it's unique combinations of effects, or new ways for them to interact, they find musical magic. The Astral Destiny may not quite be an out-of-body experience, but, sonically, it gets close. From big emo/shoegaze wash to ambient vibe or building gigantic guitar landscapes, we think you'll find the EarthQuaker Devices Astral Destiny an effect you keep coming back to.