Track your orderReturnsFAQsMake a card paymentWhy shop with us? RewardsBlogHelp
Call 800-449-9128 for phone-only deals - Get Details 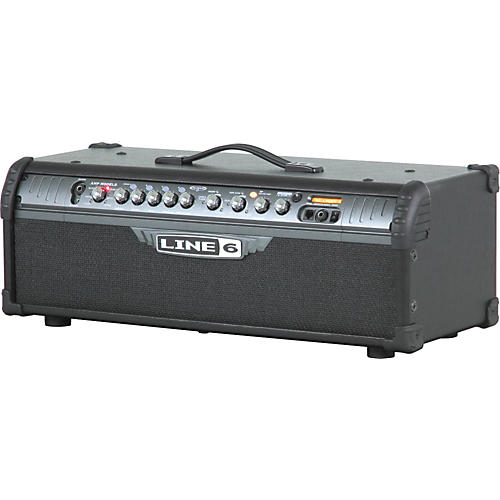 Like having your guitar-slinging hero personally set up your amp and effects!

The Line 6 Spider III HD150 Guitar Amplifier Head delivers killer amp and effects models, and a ton of presets created by some of the world's most notorious guitar stars from bands including 311, Thursday, Lacuna Coil, Hawthorne Heights, Slipknot, Ash, Albert Lee, Athlete, John 5, and many more!

Line 6 has also given the Spider III 120 another 150 song-based presets”sounds from such classics as No More Tears, Enter Sandman, Stinkfist, Back In Black, Bark at the Moon, and many more. These presets combined with 7 quality effects models, make the Spider III amp head a giant of tone that give you any sound you want, already dialed in. Now you can rule the stage with the Insane model with its truly massive gain or explore your sensitive side in the studio with the Clean model. It's all up to you.

New to the Line 6 Spider III is a huge range of killer mid-gain guitar tones. A critical advancement was made to the sound and feel of the Spider III line when a discerning panel of artists focused in on the venerable "mid-gain" range of tone to deliver the complex, layered and dynamic amp tone we all appreciate from classic and boutique amps.

Glassy: Green LED - Line 6 developed this Amp Model to emulate those late 60's and early 70's clean tones. It is like a 1973 Hiwatt Custom 100 with an extended tone control range and tightened up low end.

Twang: Red LED - This Amp Model draws on the mid 60's Fender amps, including the blackface '65 Twin Reverb and blackface '64 Deluxe Reverb. We wanted an Amp Model that has that classic glassy high-end tone, with some snap and bite.

Twin Twang: Green LED - This Amp Model is based on* a number of vintage tweed amps: a '53 Fender tweed Deluxe Reverb, '58 Fender tweed Bassman and a '60 Gibson Explorer to create a swingin' Rockabilly tone.

Blues: Red LED”Based on* a mix of a '65 Marshall JTM-45, a '58 Fender Bassman, a '63 Fender Vibroverb and a Supro, this Amp Model slides between gritty swamp-infected cleans to syrupy smooth, walloping drive tones.

Class A: Green LED - This Amp Model is based on* a fawn Vox AC-30 amplifier with an updated and expanded tone control circuit. It captures that early British pop rock tone that the Beatles and the Stones are so well known for.

Crunch: Red LED - This sound was crafted from studies of the '68 Marshall Plexi 50 Watt. This type of Marshall amp was used by a number of early metal bands. Crunch provides a wider range of tone control settings than the original Marshall amp had.

On Fire: Green LED - This Amp Model is based on* a '68 Marshall Plexi 100 watt with a few added extras; The combination of a Variac and the jumped input channels creates that infamous brown sound.

Metal: Red LED - This Amp Model is based on* the Mesa/Boogie Dual Rectifier. Use this Amp Model to get a tight and punchy, high gain Metal sound.

Spinal Puppet: Green LED - This sound was created to be an aggressive high gain Amp Model with a unique Mid control that will sweep though an entire spectrum of tone on one knob. The Mid knob for this Amp Model changes the character of the distortion. When set to minimum, the distortion exhibits Fuzz pedal characteristics. When the Mid is set to noon, it mimics the creamy modern high gain amp tones. And when the Mid knob is turned up to max, it's very much reminiscent of that Class A sound.

Insane: Red LED - This model is a "dialed in for shredding" version based on* the Mesa/Boogie Dual Rectifier red channel. It combines the intensity and impact of Metal Red, but delivers more midrange and teeth for that bone-crushing, brain piercing insane grind.

80s Solo: Green LED - The goal with Insane is to provide you with as much input gain distortion as possible short of complete meltdown. You get an obscene helping of distortion, while still retaining tonal definition and character.

Effects:
A great amplifier isn't the only part of a great guitar sound. With Smart Control FX, an exclusive Line 6 feature that automatically dials in different effect parameters, you spend more time playing and less time tweaking. Simply find the effect that you want, turn the knob to your desired intensity, and you're done. You can even use multiple effects at the same if you wanna get really crazy.

Ins & Outs
When you're playing with your band on stage just put the Spider III guitar amp head on stage and crank it up. When it comes time to record, use the headphone/direct out and plug it straight into the mixing board for world-class POD 2.0 direct tone used in pro studios and stages everywhere! You can also use the same out with headphones for practicing in your bedroom. Want to play along with your favorite songs? Plug into the CD/MP3 input and you're good to go.

Plug in and separate yourself from the rest.

*All product names used in this webpage are trademarks of their respective owners, which are in no way associated or affiliated with Line 6. These trademarks of other manufacturers are used solely to identify the products of those manufacturers whose tones and sounds were studied during Line 6's sound model development.