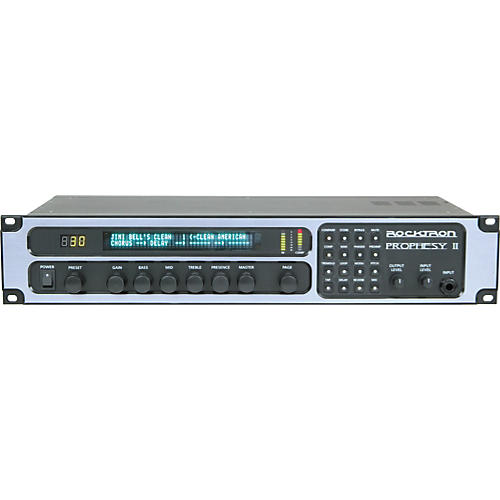 Grab onto one of the world's foremost guitar preamps: The Rocktron Prophesy II! The depth is truly amazing and the control is top notch. This outstanding DSP processor provides the ultimate control over your tone and effects. It has an extremely fast, powerful, and drop-out-free DSP processing engine built around dual 24-bit/66MHz Motorola chips. Plus that processing core is surrounded by premium Analog Devices converters at each end, so you get maximum headroom, no clipping, and none of the conversion load is put upon the main processors. This multichip array delivers higher-quality sound than many of its competitors. On top of all this, the Prophesy II is packed with rippin' presets programmed by Rocktron endorsers, Dave Mustaine, Gary Hoey, Rusty Cooley, Jimi Bell, and more.

The preamp section of the Prophesy features four channels each with their own distinct "voicings" to provide a vast array of desired tube amp sounds. Each voicing may be thought of as a "channel" and each channel has its own basic gain and master controls with bass, mid, treble and presence controls, all easily accessible with "real amp" knobs on the front panel, just like a regular amp head.

The preamp section also features a parametric Pre EQ, which allows you to "pre-shape" your tone to simulate the characteristics of several different guitars (such as fine-tuning your single-coil pickup to sound more like a humbucker, etc.) as well as an additional parametric post EQ to add extra lows, high, or scoop out the mids. And if that's not enough, there's also a global parametric EQ to adjust the overall output of the Prophesy on all presets.

The post-effects section provides ultra-transparent, high-quality effects which completely preserve the tone of the preamp-thick reverbs and lush choruses can be used without coloring the sound of the preamp's tone. Four assignable "effect blocks" allow you to assign 1 effect pre-preamp and 3 post preamp effects in any order you choose, including Phaser, Flanger, Chorus, Pitch Shift, Rotary Speaker, Ducker Delay, etc. Prophesy also features a versatile mixer section to control the mix between dry and wet signal output of every effect used in the preset.

If the effects in the Prophesy are not enough, Rocktron included a true stereo effect loop which may be assigned anywhere in the effect chain just like an internal effect. Want just an incredibly powerful effect processor? Just bypass the preamp section completely and use the Prophesy a stand-alone effect unit.

The ADSR (Attack/Decay/Sustain/Release) function features Rocktron's Pluck Detection patent-pending, and allows you to configure any of the Prophesy parameters to be controlled dynamically by each pluck of a guitar string. More about the ADSR as Guitar Player Magazine says: "it's an incredibly musical application that is very different from the usual expression-pedal tricks. You could do some groundbreaking stuff with this killer function!"

Other features include a visual representation of the assigned effects signal chain, preset title, the voicing (channel) being used, are all conveniently displayed on the first preset page. The buttons in the 16 button matrix show the effect status (in or out) as well as allow you to instantly jump to those effects' parameter pages for instant adjustment.

Of course, the Prophesy maintains the high quality operational features that Rocktron processors are well known for, such as glitch-free preset switching with no signal drop out or lag time and the most natural sounding effects.

Order today with the protection of our 45-day lowest price and total satisfaction guarantees!