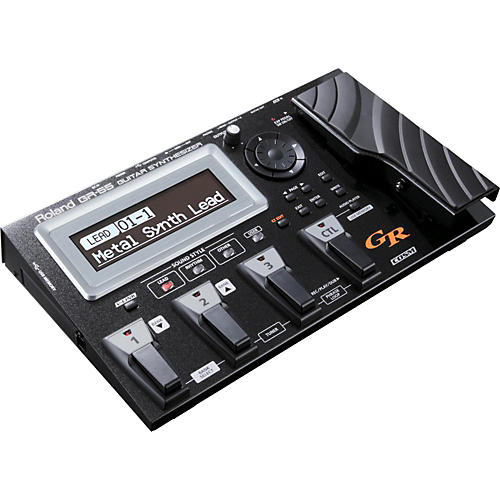 Join For Free
Share your location Order within 7 hrs 48 mins. 12 secs.
In Stock & Ready to Ship Orders placed before 3 p.m. ET usually ship the same business day (except weekends and holidays).
Ship to
Please enter 5 digits
Free Shipping Shipping and Delivery Times If we promise a delivery date and a delivery attempt is not made by this date, we will provide a refund of any shipping fees associated with your order. Questions? Call 800-449-9128
site1skuH70990000003064 true 914=7;MFI=22 true Change Location

The seamless fusion of PCM synthesis and COSM modeling.

The GR-55 allows players to combine all three sound engines, plus their guitar's normal input, to create any sound from the familiar to the original. An independent multi-effects processor is available for a huge array of tone-shaping options, plus global reverb, chorus, delay effects and EQ to add final sweetening to any sound.

The GR-55 puts guitarists instantly in touch with a huge library of amazing sounds, with no editing required. The onboard lineup of ready-to-use presets takes the pain out of the process, from pop to rock and beyond, with quick-access category buttons. Creating and editing sounds is a breeze for guitarists as well, thanks to a large LCD display, simple front panel, and the intuitive EZ Edit and Sound Style features. Also, onboard is a phrase looper that lets players capture on-the-fly recordings with unlimited sound-on-sound style overdubs.

The GR-55 also features a USB song player that lets users play WAV files stored on USB flash memory, and song playback can be controlled with the onboard pedals. The GR-55 also functions as an audio/MIDI interface for computers, with a rear-panel USB 2.0 port for a quick and easy connection. Users can easily integrate with their favorite digital audio workstation software, recording GR-55 sounds as audio in the DAW and using the GR-55's super-fast pitch-to-MIDI capabilities to trigger MIDI sounds such as virtual synths and samplers with their guitar.

The GR-55 is equipped with Roland's industry-standard 13-pin GK interface. To access the GR-55's enormous palette of sounds, guitarists must use an instrument equipped with a GK-compatible pickup such as Roland's GK-3 Divided Pickup, which is available with the GR-55 (see dropdown menu to the right and select the "With Pickup" option). The GK-3 can be easily installed on most steel string guitars with no modification to the instrument. In addition, many different GK-ready instruments are commercially available from various top guitar manufacturers.

The pinnacle of Roland's advancements in guitar synthesis over the last 35 years. Order it now!