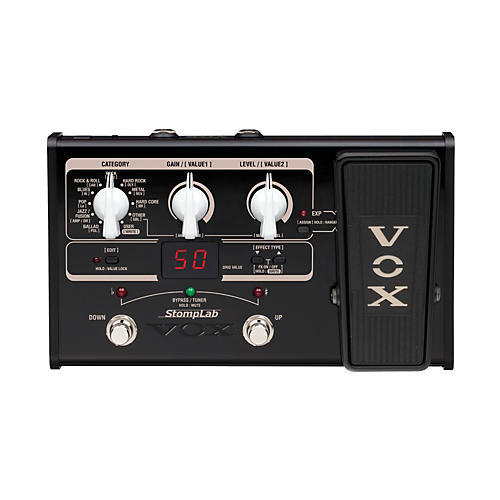 Join For Free
Share your location Order within 7 hrs 48 mins. 12 secs.
In Stock & Ready to Ship Orders placed before 3 p.m. ET usually ship the same business day (except weekends and holidays).
Ship to
Please enter 5 digits
Free Shipping Shipping and Delivery Times If we promise a delivery date and a delivery attempt is not made by this date, we will provide a refund of any shipping fees associated with your order. Questions? Call 800-449-9128
site1skuH93378000000000 true MFI=21 true Change Location

Create your own original sounds!
Simply playing the preset sounds is a lot of fun, but you'll definitely want to create some of your own original sounds as well. The StompLab IIG contains 104 types of modeling effects. These effects are categorized as pedal, amp, drive, cabinet, modulation, delay, and reverb effects. When noise reduction is included, you can use up to 8 of them simultaneously. Each effect type provides multiple parameters that you can deeply edit to create your perfect sound. Since the sound engine is equivalent to those featured on the worldwide best-selling VT+ series of modeling amps and the ToneLab series of multi-effect units, you need no further guarantee of quality. Sounds you create can be saved as 20 user programs.

Use the expression pedal for realtime control!
The StompLab IIG and IIB are equipped with an expression pedal that can be used to control wah and volume, and also the parameters of each effect. You'll be free to create unique original sounds that you've never heard before.