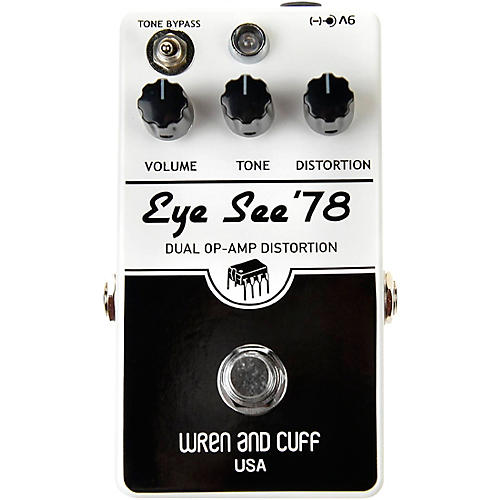 Join For Free
Share your location Order within 7 hrs 48 mins. 12 secs.
In Stock & Ready to Ship Orders placed before 3 p.m. ET usually ship the same business day (except weekends and holidays).
Ship to
Please enter 5 digits
Free Shipping Shipping and Delivery Times If we promise a delivery date and a delivery attempt is not made by this date, we will provide a refund of any shipping fees associated with your order. Questions? Call 800-449-9128
site1skuL56033000000000 true true Change Location

Get iconic Muff tone in this modern, upgraded stomp.

Talking shop about Muff-style fuzz with any guitar player that knows his or her stuff is a relatively straightforward conversation. Aside from the myriad of variants, the talk usually evolves into transistors and who used which variant.

There was a curious time in Muff history, when the circuit designed changed drastically. That time was 1978, when the transistors inside were scrapped in favor of operational amplifiers, otherwise known as op-amps, which are integrated circuits, or ICs. This particular variant was only manufactured for around two years, and as such, only a few thousand ever made it out of NYC alive.

Fast forward to 2014, and the Muff masters at Wren and Cuff have crafted the definitive version of the non-transistorized fuzzbox. They call it the Eye See Pi.

In 1978, a switch was added to the back of the original, and the Eye See Pi includes this switch as well. The control is labeled as “Tone Bypass” on both old and new pedals. Essentially, it removes the passive tone stack from the circuit for a volume boost and a significantly more raw and open sound. Of course, this switch renders the tone control useless, but you won’t miss it; this switch is just too cool.

If you’re looking for a largely-untamed IC-based fuzz and distortion machine, with the ability to adapt to most genres of music under the sun, look no further than the Eye See Pi.