Join For Free
Share your location Order within 7 hrs 48 mins. 12 secs.
In Stock & Ready to Ship Orders placed before 3 p.m. ET usually ship the same business day (except weekends and holidays).
Ship to
Please enter 5 digits
Free Shipping Shipping and Delivery Times If we promise a delivery date and a delivery attempt is not made by this date, we will provide a refund of any shipping fees associated with your order. Questions? Call 800-449-9128
site1skuH84196000000000 true MFI=8 true Change Location 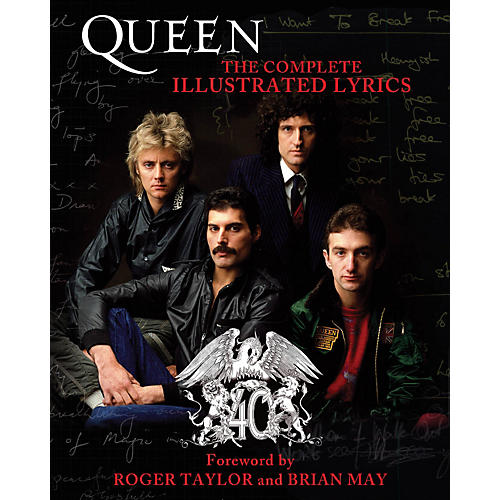 Every lyric ever penned by this incredible foursome paired with rare images of the band throughout its career.

Queen: The Complete Illustrated Lyrics is the first book of its kind. Never before has there been a complete Queen lyric book. The hundreds of images that accompany the songs range from handwritten lyrics to rare photographs from the stage to the studio. Also included is a complete discography, pairing each song to the album on which it was originally released. Designed by the band's longtime creative director, Richard Gray, the book is as true to the band as can be, carrying with it the flamboyance, expression, and depth that Queen embodies as writers and performers.

In 2011, the world celebrated the 40th anniversary of Queen - one of the most innovative, glamorous, and influential bands in history. Over the course of the band's career, they have grossed 170 million album sales worldwide, have written 18 number one hits, and performed 700 concerts. While some acts enjoy a forte of incredible showmanship, a virtuoso instrumentalist, a strong, charismatic leader, or a prolific sole songwriter, Queen beholds all of these strengths. Although Freddie Mercury and Brian May are recognized as the prime songwriters, each of the members have penned number one hits, including classics such as "Bohemian Rhapsody" (Freddie Mercury), "Another One Bites the Dust" (John Deacon), "A Kind of Magic" (Roger Taylor), and "We Will Rock You" (Brian May). The fates brought the four creative and cerebral youths together in London in 1971 (Mercury was by then an established fine and graphic artist, May was enveloped in the study of astrophysics, Roger Taylor enrolled in dental school, and John studying electronics). Since then, they have made history with their sophisticated fusion of operatic expression, theatrical performance, symphonic melody, and raw rock-and-roll.

Beginning with their debut Queen in 1973 (EMI/Electra Records), the band took the UK by storm, then conquered the United States along with the rest of the world, serving as pioneers of stadium rock and enjoying commercial success and momentum well into the 1980s (marked by the famous Live Aid appearance in 1985) through the early 1990s. The whirlwind took a startling pause when singer Freddie Mercury passed away from AIDS on November 24, 1991. The living members have forged ahead and remain great music makers.
This book takes you on their incredible journey through the lyrics that roll off the tongue of any fan driving down the road when any of their classic hits comes on the radio, or the superfan who wants to complete their collection of Queen memorabilia.

If there is one book for a fan of Queen to possess, this is the one. Get your copy ordered today!