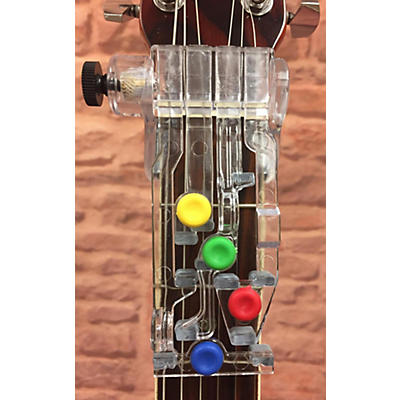 It's always a great feeling to discover something that's not only useful, but looks cool too. That's the reaction you might have to a chord finder. A useful tool for any guitarist or bassist, these compact devices and accessories include fretboard-mounted LED lighting, glow-in-the-dark fret markers and even a fun set of chord dice. Stage presence is a big part of any band's identity, and plenty of it comes from lighting and effects. LED-powered chord finders come in two varieties, both of which add a subtle lighting effect to your guitar that makes them not only helpful for you, but also gives you an added visual effect onstage. A fretboard illuminator is a simple little light that shines on the neck of your guitar so you can see even on a darkened stage to be sure your fingers are hitting the frets in exactly the right places. For an effect that's a little more subtle, try a fiber optic fret marker. These come with a thin strand that runs along the edge of the neck and indicates the positions of standard-spaced frets with miniature points of light. You'll never have to worry about fumbling for the right fret when the lights are down, because you'll be able to see exactly where they are at a glance. If you're not a fan of sticking LEDs to your instrument, some glow-in-the-dark fret markers might be up what you're looking for. These are high-visibility stickers that go on over your neck's standard fret markers. Not only do they glow as long as two hours at a time, but they're also UV-reactive to shine brightly under black light stage effects. Take a look at some chord dice if you're a songwriter, beginner or teacher. When you're brainstorming a new chord progression, a roll of the dice can give you the inspiration you need to solve musical writer's block. The chord dice are a great teaching tool for a novice musician or writer, useful for learning the relationship of a chord to its root key. From fretboard lights to fret markers to chord dice, the various chord finders are useful additions to a guitarist or bassist's kit, especially if you're a new player still getting the hand of finding your way around the frets by feel. Put your preferred chord finder in place on your guitar and not even a darkened stage can get in the way of you nailing that intro.